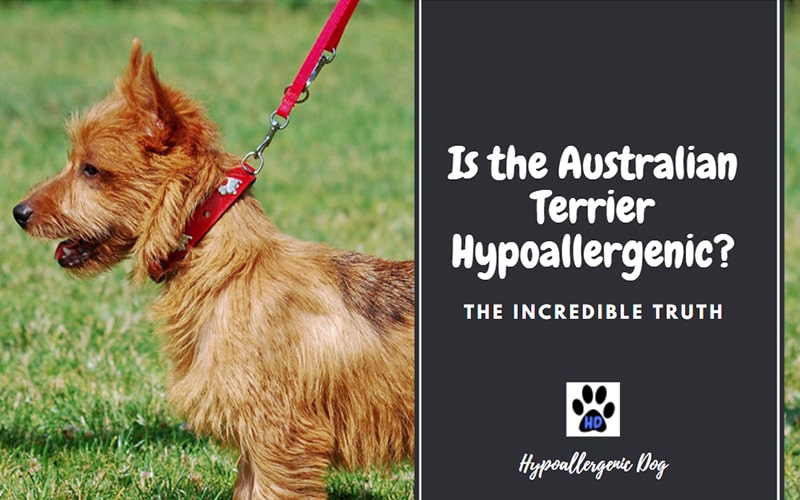 100 percent! With a harsh, dense, and waterproof double coat — the Australian Terrier is the perfect companion for pet parents with intolerances!

One look at the Australian Terrier’s thick and characteristically long coat — and you’re thinking — yeah, that’s gonna be worse than a hayfever sufferer in a flower market.

But that couldn’t be further from the truth!

The Australian Terrier shedding rate is seriously low. The coat, although usually left untrimmed — drops hardly any fur at all — meaning that you’re not going to be itching and scratching from rogue hairs. Furthermore, their thick undercoat traps the cough and sneeze-inducing dander — the bane of many allergy-suffering pet parents.

However, there is one thing to bear in mind.

While some pet intolerances stem from unwanted reactions to poochie fur, equally as common are undesirable symptoms stemming from their saliva. You see, according to science boffins, many of us two-legged types have a strange response to doggie spit — or to be more accurate, the proteins that it contains.

Luckily, the Australian Terrier has no predilections to slobber or drool — unlike, say, Bloodhounds and Mastiffs. So, you’re not going to be soaked with sniffle-causing saliva every time your Aussie Terrier shakes his head.

But, while drool-free, these feisty pooches do like to lick. They love and adore you — and want to show you that affection with their tongue. While for some this may be a welcome showing of endearment — for allergy sufferers, it can be a ticking time bomb.

Luckily, you can easily train your Australian Terrier to show his or her overwhelming attachment to you in other, non-licky, ways. 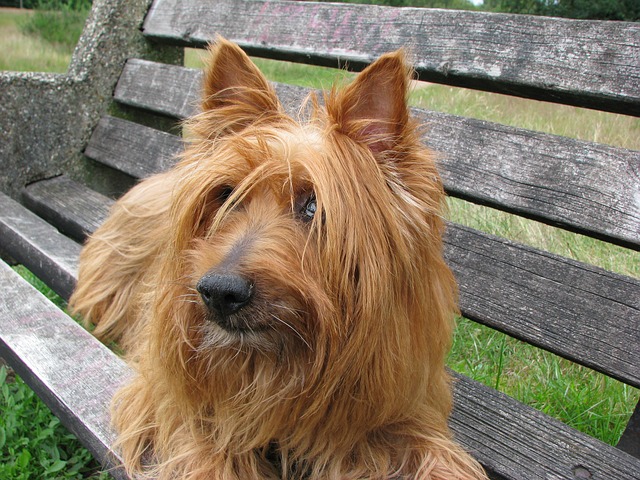 About the Australian Terrier

The name kind of gives it’s home country away — right?

When the British began to settle in Australia in the 19th century, they found themselves a little out of place. This wasn’t the UK — the summers were hotter, the land vastly more expansive, and they were confused by all the weird and wonderful (and often deadly) animals.

To make their lives more comfortable and familiar, they decided to import things that reminded them of home — basically, this was tea and terrier dogs.

The British were obsessed with terriers in the 19th century (and tea), and hence introduced every family type they could think of to this new county — Dandie Dinmont, Yorkies, Cairns, Norwich, and Scottish terriers.

They then cooked them all up in a pot (not literally, we hasten to add) — and the resulting pooch was the Australian Terrier (or Aussie Terrier).  Simply, this new breed had one purpose — to exterminate anything that the British (or now new Australians) found undesirable — typically rats, mice, and snakes (yes, really).

Over time, these frontier-exploring poochies developed more than just a working relationship with their owners — they enjoyed many a quiet evening snuggled up against their masters and mistresses.

This bond, if anything, has grown stronger over the last century, with the Aussie Terrier hating being alone — it desperately needs human companionship.

Other down-under originating pooches, such as the Cockapoo and the Cavapoo, are only pretenders to Australia’s National Dog throne. The Aussie Terrier was the first officially recorded breed in its homeland — and also the first Australian dog family recognized in other countries.

The Kennel Club (from England, it doesn’t have a country title because it was the first, like ‘The Open,’ in golf) admitted the doggie to its ranks in 1933, although the AKC (American Kennel Club) didn’t recognize the Aussie until 1960.

Characteristics of the Australian Terrier

At first glimpse of an Australian Terrier dog, you would think it was a Yorkshire Terrier.

But when you look closer — the ears are too long, the muzzle too extended, and the hair too coarse.

The truth is, if you’re knowledgeable enough about doggies, and are that way inclined, you could pick apart all the Aussie’s characteristics and name the terrier breed from which it received those traits.

These pooches are typically 10-11 inches in height, and weigh around 15-20 pounds.

It’s one small — but attitude-driven — doggie!

They have an extended torso and a relatively long neck, for a terrier. The Aussie has medium length fur, with more abundant hair around the neck and quarters. While their coat initially appears to have the soft and lustrous texture of a Yorkie — it’s actually quite harsh and rough — giving it waterproof characteristics,

Often, they boast a silky plume on their heads (another remnant of the Yorkie — but don’t put a bow in it!) that contrasts with the coarse hair on the rest of the body.

Typical colors of the Aussie Terrier Include:

The eyes of the Aussie Terrier are engaging — bright, alert, and with an air of importance and intelligence. When running and walking, they have the gait of a real working pooch — not a lap-dog. 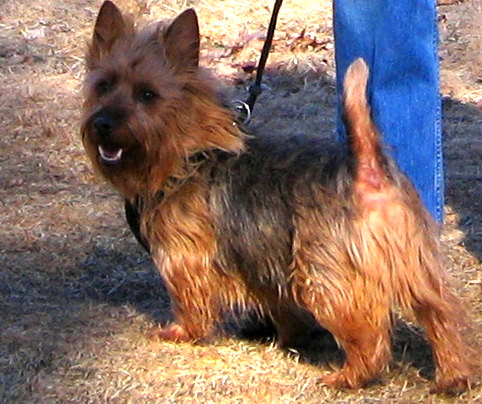 Perhaps the most significant reason the Aussie Terrier is such a good companion is that he is packed full of character.

‘Spirited’ is often used by experts to describe this fur baby —  but that’s something of an understatement. Lively, inquisitive, and engaging — they have a true joie de vivre.

The Aussie Terrier wants to be involved — in everything you do. Don’t expect any quiet ‘me-time’ in the bathroom — they will be in there watching you — hence, not great for those who like their privacy.

They’re not aggressive — but they are incredibly courageous. It’s virtually unheard of Aussie Terriers to pick a fight — but if threatened, they will not back down, especially if they believe it’s necessary to protect you or your family.

And that’s another aspect of this pooch — they adore human company. They’re excellent around both small children and large adults, making excellent family dogs — and they hate to be left alone. If you’re out at work most of the day, then the Australian Terrier isn’t a good choice, as they suffer from separation anxiety.

However, one small word of warning.

They often struggle in multi-animal homes. The issue is, their jealousy is off the scale. They don’t like sharing their pet parents with other four-legged beasties —  cats or dogs. Hence, it’s best to bring up your Aussie in an environment where s/he is the sole focus of you and your family’s attention.

Stanley Cohen, in his groundbreaking book, The Intelligence of Dogs (2005), ranked the Aussie Terrier as the 34th canniest canine.

This means that these pooches have the ability to be trained easily.

The bad news is — they don’t always want to sit in lessons.

The Aussie Terrier is willful and stubborn. You may want to spend an hour on sit-and-stay, but your pooch would probably prefer to play with his or her favorite toy.

Hence, a firm (but not harsh) approach is required.

Furthermore, this extends into all aspects of your interaction. From day one, it’s important to establish that you are the leader of the pack (as in being the chief wolf, not a suicidal motorbike rider as in the Shangri-Las song). Otherwise, he will rule the house like a South American dictator.

Aussie Terriers are highly active — although they will adapt well to apartment living, as long as you engage them in sufficient play and exercise. Being small, it’s simple to involve them in games of fetch and tug-of-war within your four walls —  and without wrecking furniture.

However, they will still need at least one, preferably two, outdoor walks of around 20 minutes each per day.

But never, ever, let them off their leash.

These are real terriers (well, a mixture of all the best) — meaning they love digging and, with their massive prey drive, chasing after small furry animals. 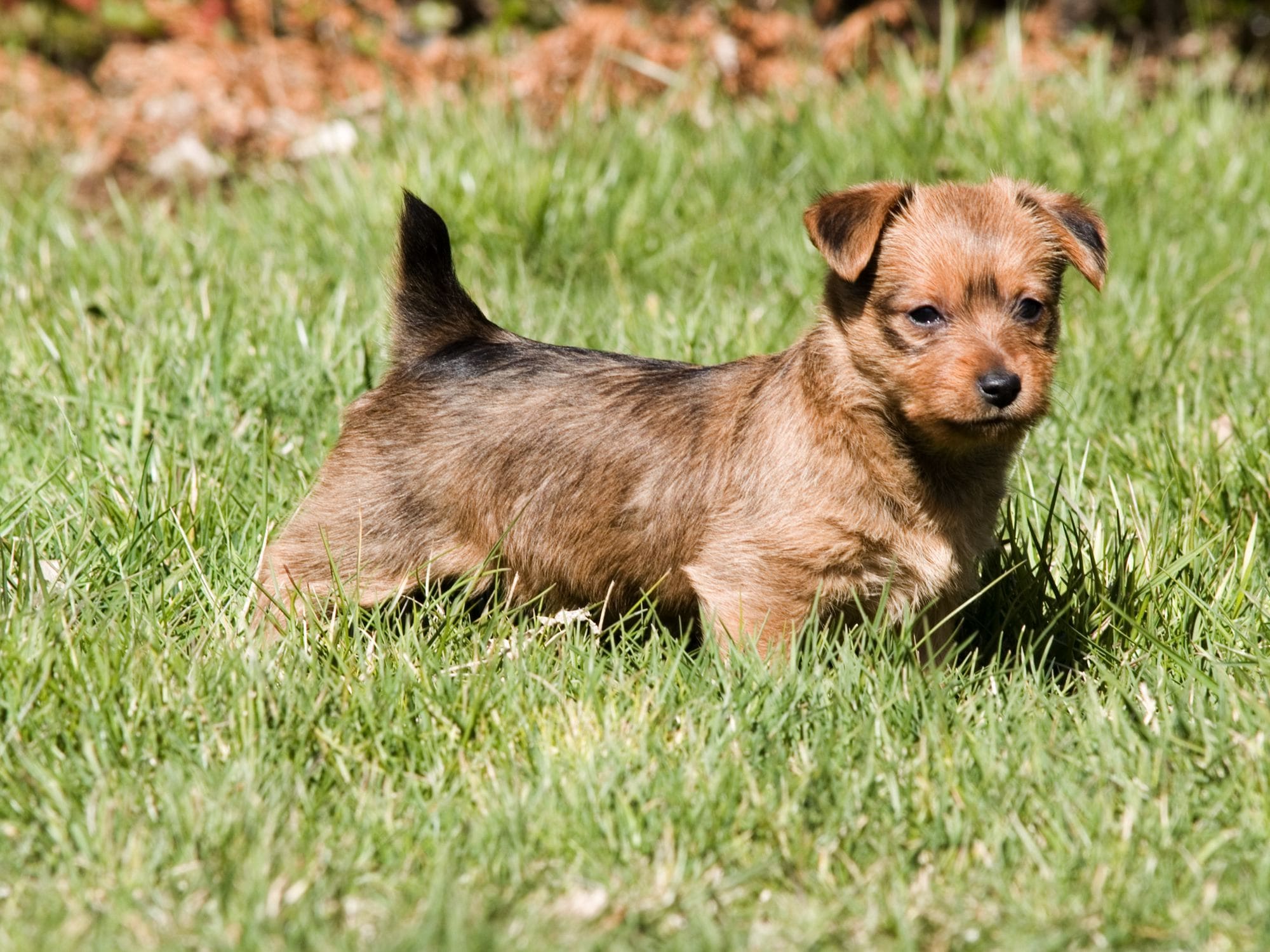 According to a study by the Australian Terrier Club of America — which looked at 619 of these feisty pooches — the most common health issues are: 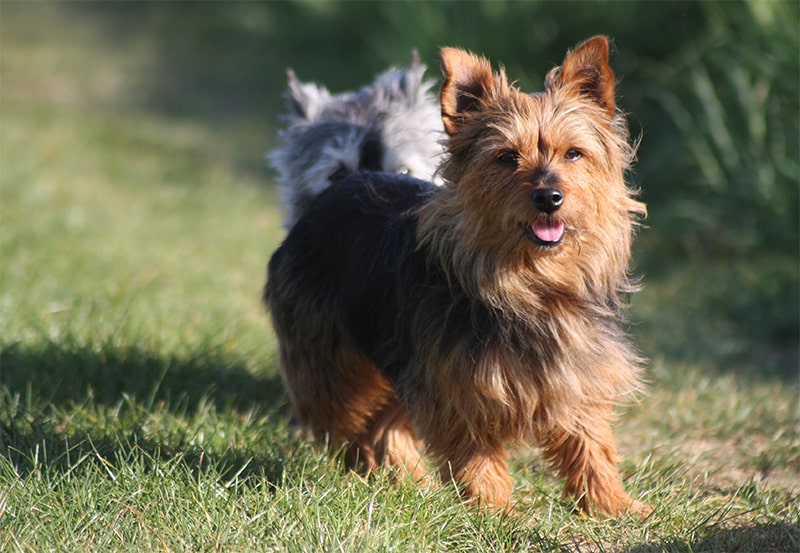 Just keep him away from other pets — otherwise, he’ll be insanely jealous!

And, with his low-shedding and dander-retaining coat — the Australian Terrier is a wonderfully hypoallergenic pooch.

Do Australian Terriers Bark a Lot?

The Australian terrier can become vocal when left alone for long periods or when over-excited.

How Much Do Australian Terriers Cost?

On average, an Australian Terrier puppy will cost around $1500. With a superior pedigree, this can increase to around $6000.

How Big Is an Australian Terrier?