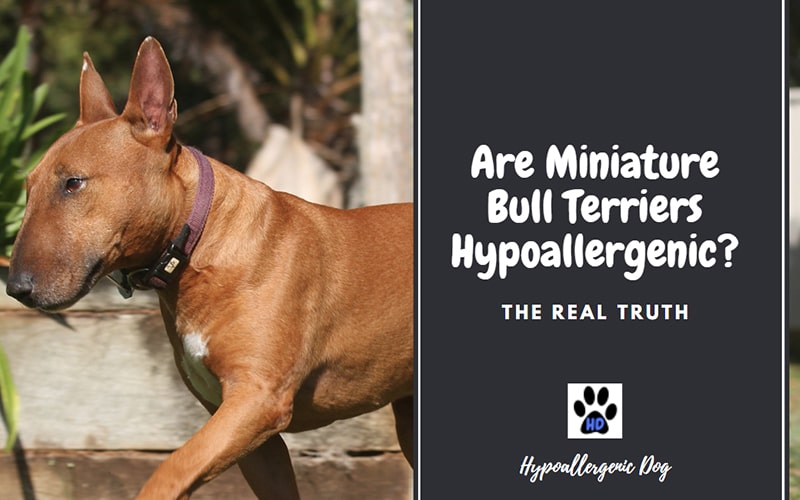 Is the Miniature Bull Terrier Hypoallergenic?

You bet! Unlike its standard cousin, the Miniature Bull Terrier sheds little hair and is ideal for those with fur intolerances!

It’s a Bull Terrier — but a pocket-sized version!

Unlike the Standard Bull — which can cause allergy issues — these mini pooches are ideal for people with animal intolerances.

The intense selective breeding that produced the Miniature Bull Terrier created a genetic abnormality — it dramatically reduced the amount of hair that this doggie drops.

Furthermore, with a slow-growing coat — even in the usual shedding seasons of spring and fall — you’re not going to see the typical signs of ‘fur angels’ floating around your living room!

And, if that wasn’t enough — the Miniature Bull Terrier is low on the doggie dander scale.

These dead skin cells are one of the primary causes of pet parent allergies — aggravating your skin, nasal passages, and throat. Your body — considering these harmless cells a threat — goes into inflammatory overdrive, causing sniffles, itching, and sneezing.

Their low dander count is what makes the Mini Bull Terrier hypoallergenic.

About the Miniature Bull Terrier

In many ways, the miniature Bull Terrier is like that comical British car — the Mini (you know, the one in the movie, The Italian Job).

Ok, just stick with me on this one.

In the late 1950s, British Leyland began production of the Mini — a small compact car. Although successful, the manufacturer thought it would be better if it was a bit larger — so it evolved into the Traveller and Metro. Unfortunately, everyone thought these new versions were complete trash — so, in the year 2000, BMW went back to basics and produced a ‘new’ small Mini.

It was good — but it wasn’t the same as the original.

The story is similar for the Miniature Bull Terrier.

Back in the 19th century, dog breeders crossed the English Bulldog with the English Terrier — creating the Bull Terrier.

And, they were tiny — the same size as Miniature Bull Terriers today.

Used as fighting dogs (for killing bears and bulls attached to posts — lovely, right?), the sadistic owners thought it would be more dramatic and effective if the dogs were larger — so they bred them to the size of the now-familiar Standard version.

However, in the 1990s, some enthusiasts believed the Bull Terrier should be taken back to its roots — so they began a program of shrinking the doggie down again.

While this created a mini-pooch that was similar in looks to the original type — it wasn’t a duplicate. Instead, the close gene pool used created a plethora of health problems for these doggies.

Since 1885, all members of the Bull Terrier family had been classed in the same AKC group — but the miniature version didn’t gain its own separate identity until 1991. 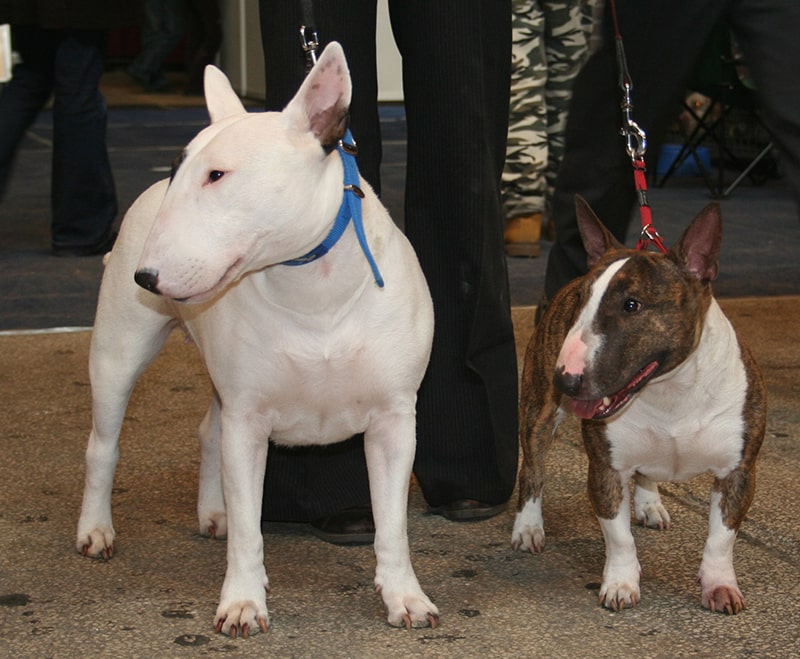 Characteristics of the Miniature Bull Terrier

If there’s one feature that distinguishes the Miniature Bull Terrier from all other breeds (well, apart from the Standard version) — it’s their unmistakable egg-shaped head. With triangular, sparkly eyes and erect, triangular ears — it’s a pooch that exudes mischief.

The Mini Bull Terrier size is typically 10-14 inches and it weighs 18-28 pounds. Hence — for its height — this is a robust and stocky pooch. The body of the Miniature Bull Terrier is rectangular, muscular, and — for its dimensions — remarkably strong.

The coat is fine, short, and silky, and it lies incredibly close to the skin. Their color can be solid white, or white mixed with:

Although originally bred for fighting in the 19th century, the Miniature Bull Terriers isn’t an aggressive pooch. They’re excellent with kids — although I wouldn’t recommend them in a home with small toddlers.

That’s not to say they would be vicious in any way — but these doggies are rambunctious and powerful — which could be a little too much rough-and-tumble for younger two-legged types.

They will mix with other canines in the home —  but out on your outdoor walks, be a little wary. They can have an unpredictable nature around other doggies — and smaller pooches can trigger their prey drive.

Within the home, these tiny terriers are surprisingly loving — although they can be stubborn, and ‘affection time’ is often on their terms. Fearless and inquisitive, they will explore every inch of your house — so keep any treats well hidden!

They need to understand what is right and wrong — and how to behave around humans and other dogs.

They love to please their pet parents — which is a bonus for training — but the issue is, sometimes they struggle to understand exactly what you are asking of them. I wouldn’t be so harsh to say they’re unintelligent — just, perhaps, a little slow on the uptake.

Unlike, say, the Cockapoo — who becomes quickly bored with educational sessions — the Miniature Bull Terrier will happily try and follow your instruction for hours. Trust me, you will become tired (and possibly frustrated) with the training before your pooch.

Patience is the key.

A careful balancing act is required with exercise.

Firstly, it’s essential — as these doggies (who love to eat) are prone to obesity. However, they can suffer from temporary lameness as they mature from a puppy to an adult. A mixture of their muscle density, weight, and desire to be active can mean that their joints don’t have the capacity to cope with these demands. So, daily activity is needed as they grow — but not to any great excess.

As adults, a couple of 20- or 25-minute walks per day is sufficient — and they make excellent apartment and small home dogs. 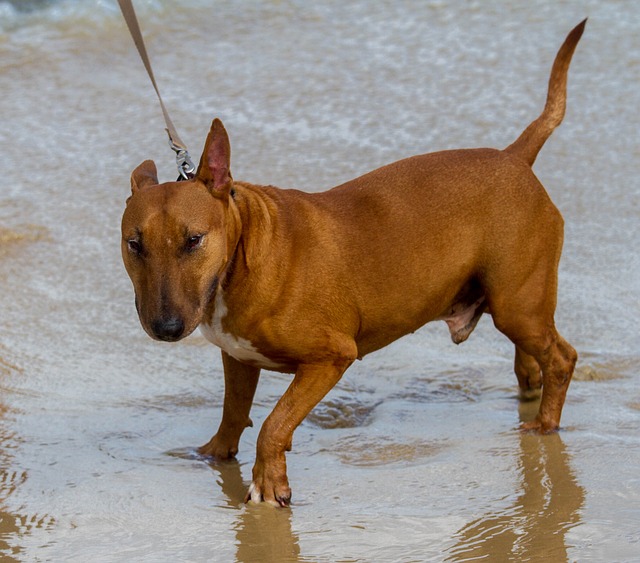 Perhaps the only major downside with these feisty pooches.

While selective breeding shrunk them down and made them hypoallergenic — it also led to numerous health problems.

The most common issues include:

Hence, as a responsible pet parent, you need to be ever watchful for these conditions. If that sounds a little too stressful, perhaps consider an alternative small hypoallergenic doggie.

That said, the Miniature Bull Terrier can enjoy a lengthy lifespan — typically between 11 and 13 years. 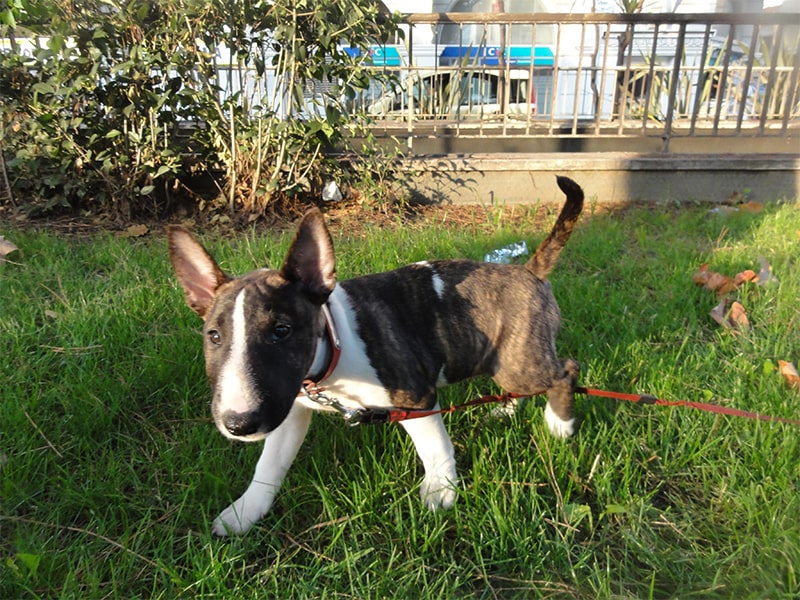 Hilarious, mischievous, and lively — the Miniature Bull Terrier is an ideal pooch for those people looking for a small dog that oozes character and a lust for life.

With their short and low-shedding coat, they can be a consummate fur baby for pet parents with allergies.

Bear in mind — they take a little patience to train — and you need to be watchful for the many health issues to which they are prone.

No — but they can be unpredictable around unfamiliar dogs. Hence, always keep your Miniature Bull Terrier on a leash when on your daily walks.

They’re excellent with children — but may not suit a home with small toddlers, as these doggies can ‘play rough.’

Yes! The Miniature Bull Terrier shedding rate is incredibly low — they produce little dander, and don’t have a propensity to slobber or drool.

The Miniature Bull Terrier can become vocal when playing, overexcited, or when a stranger enters your home.

What Are the Worst Dogs for Allergies?

The dogs to avoid if you suffer with intolerances are the ones that shed a great deal, produce a lot of dander, and slobber. Among the biggest offenders are the Saint Bernard, Akita, and Siberian Husky.