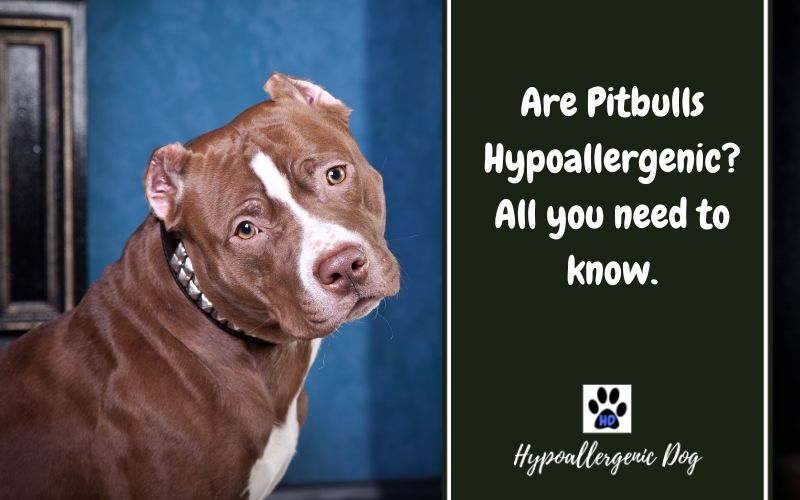 No! Unfortunately, the amazing Pitbull is not considered a hypoallergenic breed, which means they aren’t a good choice for dog allergy sufferers.

The Pitbull terrier is a breed made up of several others. This means they carry genes from various other breeds, with a bulldog and terrier being at the forefront. They have been around for many years and were originally used as bait for hunting large animals. Sounds monstrous, right?

Their reputation has labeled them the most aggressive dog and is now found to be illegal to own in many countries. But why is this breed so misunderstood?

Loving and gentle, and if raised correctly, Pitbulls can make an amazing companion for children. Despite their reputation, this breed often doesn’t make the best guard dogs, due to their overly eager and friendly greeting of strangers. They’re extremely intelligent dogs that are super-easy to train and learn tricks without any issues.

Pitbulls were used as mascots for the US army! They helped recruit soldiers and symbolized bravery, loyalty, and determination.

The largest Pitbull recorded was named Hulk. At an immense 174 pounds, he was raised to protect his family. However, because of his gentle nature, he became more of a bodyguard to the family’s child. This coincided with their reputation of being the ‘nanny dog’ in the 19th Century.

For a synopsis of the details below, skip to our Pitbull dog breed summary further down the page.

Image by Jonathan Cooper from Unsplash

What’s Coming up on This Page?

If you have specific questions about the Pitbull breed, check out our FAQ section.

Image by Jordan Bigelow from Unsplash

The Pitbull impresses many people due to their athletic physique and size. Males and females differ slightly in stature, but their majestic features let us truly appreciate what they have to offer.

A breed mixed up from many others, it means there are many kinds of Pitbull. Coat color can also widely vary for the same reason. Traditionally they’re short, stocky dogs sporting a muscular appearance, and typically short-haired with a pointed tail.

As mentioned, Pitbulls are short-haired dogs. Thanks to this physical trait, the misconception surrounding the breed being hypoallergenic stems. Dogs with a short coat are still prone to shedding, which isn’t ideal if you suffer from allergies.

These brawny bow-wows blow out their coats with the seasons, but they generally shed all year round. Their fur is short, smooth, and wiry. It can be several different shades from white, tan, black, and brindle. These beauties can have fantastic patterns as well.

This breed has received some bad press over recent years, with many countries making them illegal to own. But why? What is it about a Pitbull that deems them so dangerous?

These magnificent beasts were once titled ‘America’s dog.’ They have a loyal, friendly nature with a real sense of stubbornness and the ability to be the family clown. It was no wonder these gentle giants were popular once upon a time.

The Pitbull, same as any other breed, can become aggressive if they lack the appropriate care, socializing, and training. Their athletic build can make them appear dangerous, as well as their strong will. As a result, they’ve now become a feared breed amongst families.

The very fact that this breed is misunderstood is the reason why many countries have banned them from becoming household pets.

Encouraging Good Behavior in Your Pitbull

As with all breeds, obedience training is a vital starting ground when encouraging good behavior in your Pitbull. Using positive reinforcement helps your dog understand simple commands at first and continue to progress. This will not only allow your dog to become respectful but will heighten the everlasting bond every owner wants with their pet.

Due to their physical structure, they will have excess energy to expel. Exercise is a crucial part of encouraging good behavior. A tired dog is usually a well-behaved dog! Taking your tail-wagger out for regular exercise can also help them socialize with other people and animals.

All training should be started when the dog is young, as they will be more susceptible to learning new tricks and commands.

Pitbulls have short coats that are only one layer. And, even though many bear a wiry coat, regular grooming is necessary to keep their skin healthy.

Brushing is one of the most neglected tips of the grooming routine. Due to the short hair, this is a relatively easy job. They only need to be brushed on average once a week. This can help rid any excess fur that would otherwise randomly fall out.

Bathing your pup can cause some issues, particularly to a Pitbull. Their skin can be super sensitive, and bathing can strip their coats of natural oils. This could lead to irritation and make the skin sore. Thus, consider the type of shampoo you’ll use. Pitbulls generally work well with oatmeal-based products.

Bathing only needs to be a once-a-month job unless your dog is the adventurous type — mud-lovers will require more frequent soaks in the tub.

Ears and nails should be checked regularly and cleaned or trimmed when necessary.

Find out what equipment you will need for grooming your dog.

This breed is susceptible to certain medical issues, including:

Image by Erik Mclean from Pexels

Pitbulls have a remarkable personality as well as being highly intelligent, loving, and playful. Unfortunately, their shedding coat does mean that they aren’t a suitable option for those suffering from pet allergies. But is it possible to get a hypoallergenic Pitbull mix?

No dog is 100 percent hypoallergenic. However, as the Pitbull is made up of a few different terrier-type breeds, there is a chance you may be able to find a pooch with similar traits, that’s better for your allergies.

Remember, owning a pet that isn’t classed as a hypoallergenic breed isn’t out of reach. It’s dependent on how severe your allergy is and whether or not it’s eased by taking medication.

If you’re still considering a Pitbull, you need to ensure that you’ve done your research on how to care for and train them properly. Sadly many of this breed find themselves in rehoming shelters. However, there are some great hypoallergenic Pitbull alternatives. These are family-oriented, full of energy, and trainable such as the Portuguese Water Dog, American Hairless Terrier, or Coton de Tulear.

Are Pitbulls hypoallergenic? Sadly not, but they are a remarkable breed that doesn’t deserve the bad press they have received over the years. Instead, they should be known for their energy, intelligence, and fun-loving personality.

No, Pit Bulls are not hypoallergenic dogs. However, because of their single coat, they don’t shed as much as other breeds.

With a coat as thick as the teacup Pomeranian, it’s shocking to believe that they only shed a little. Do expect to find their fur around the house but it would never be excessive. This is something that many allergy sufferers can tolerate, although they are not considered a hypoallergenic Pomeranian.

What Is the Most Hypoallergenic Dog?

The top breeds for allergy sufferers are:

Yes. They crave attention, are extremely friendly, and often have protective tendencies. Without careful training, these can affect their behavior for the worst.

Bluenose Pitbulls are bred for their distinctive ‘blue’ color, which is closer to grey. This type of breed is extremely rare, as the ‘blue’ gene is recessive, so they can only be born from a mom and dad who are both ‘blue’ themselves.

Similar to the Pitbull terrier, their coats are short and glossy, and they generally don’t shed much. While not classed as hypoallergenic, considering the shed factor, those with allergies may find a Bluenose tolerable.

The term hypoallergenic could be deemed as a black and white answer. However, simply put, it’s totally dependent on the allergies of the person. If severe, owning an American Pitbull may not be the best choice — as they shed. However, if the condition is mild, you may be able to cope with the level of fur fall-out.

That said, officially, American Pitbulls are not classified as hypoallergenic.