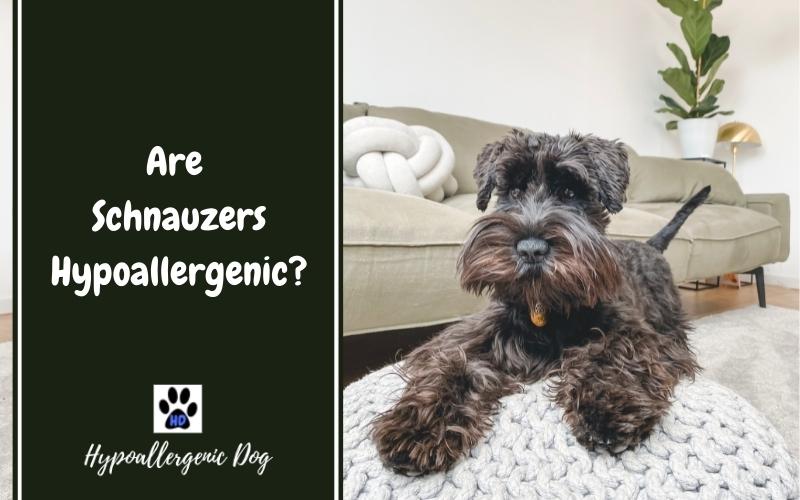 Yes! The Schnauzer is a hypoallergenic dog breed that hardly sheds or drools.

As soon as you saw the Schnauzer, you probably fell in love with its handsome, distinctive demeanor. Then you may have wondered “are Schnauzers hypoallergenic dogs?”. Luckily for those dog lovers who suffer from allergies, this adorable breed is indeed an ideal candidate for those who need a low dander, low shedding, and low slobber option. These are the three factors that help to determine if a dog is truly a good fit for people who are allergic to dogs.

There are plenty of great aspects about the Schnauzer, no matter what size you are looking at adding to your family. First, they are great with children. Secondly, the Schnauzer actually does fairly well as an apartment dwelling dog – even the giant version – as long as they are given plenty of time to exercise and get fresh air on a daily basis. Additionally, this breed doesn’t bark randomly or without reason, making it a favorite for your neighbors as well.

For a quick summary of the Schnauzer breed features, skip to our Schnauzer Dog Breed Summary further down the page. 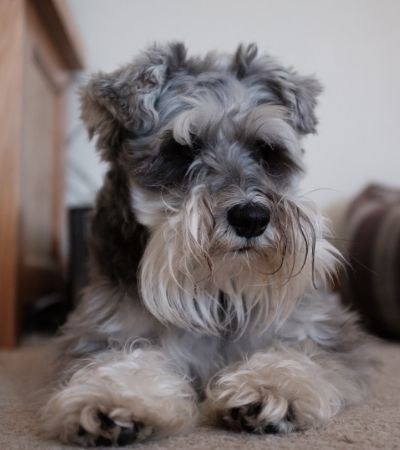 The Schnauzer’s Characteristics and Appearance

The Schnauzer is currently the 10th most popular breed in the world, with nearly 100,000 individual dogs registered. There are three different sizes of the breed for aspiring owners to choose from.

Schnauzers come in a variety of different colors: black, white, silver, and salt and pepper. They have a thick, wiry coat of hair. This particular feature is what makes the Schnauzer hypoallergenic. Because they have non-shedding coats, you won’t find Schnauzer hair (and dander with it) all over your home – they keep their hair to themselves! These amazing dogs have good longevity if properly taken care of, and generally live between 13 and 16 years.

As you might have guessed, the Schnauzer originated in Germany. This makes them different than many other terrier breeds, as many terriers originated from the British Isles. This breed is known as the Little Beard, obviously due to the adorable facial hair that they are so well known for. Whiskers were incredibly important for working Schnauzers, as they protected their face from getting bitten from the prey they were hunting.

These dogs first came to the United States from Germany in the early 20th century with immigrants that couldn’t bear to leave their beloved family pets behind. Although, this dog is extremely devoted to its entire family, so it is possible that it refused to be left behind as well.

Schnauzers are loyal, spirited, extroverted, active, fearless, playful, intelligent, and highly trainable dogs. They are friendly and devoted to their families, and their good nature makes them ideal with young children. Their naturally protective instinct makes them loyal family pets and good watchdogs. While there are many commonalities between the temperament of the various schnauzer sizes, their size also has some influence on their personality.

Avoiding Behavioral Problems With Your Schnauzer

The Schnauzer is a very smart dog. In fact, they are well known for their intelligence. Their smarts make this breed fairly easy to train in basic commands and tricks, though some dogs have a stubborn streak and need a slightly firmer hand during training.

There are a couple of different concerns that you should take into account prior to bringing a Schnauzer into the mix. The first is that Schnauzers, though they are generally independent dogs, can have separation anxiety issues. It is important to consider the amount of time you are realistically able to give this dog prior to bringing one home.

Schnauzers are protective by nature, which makes them great watchdogs, but also means they will bark often to warn. Training them from young to control their barking is very important with Schnauzers, particularly Miniature Schnauzers, who have a

It is important to note that Schnauzers are an active dog which needs at least one hour of walking and exercise per day. Thankfully, Schnauzers enjoy many forms of exercise, including swimming, playing fetch, and accompanying their owners on long hikes, short bike rides, or gentle jogs. 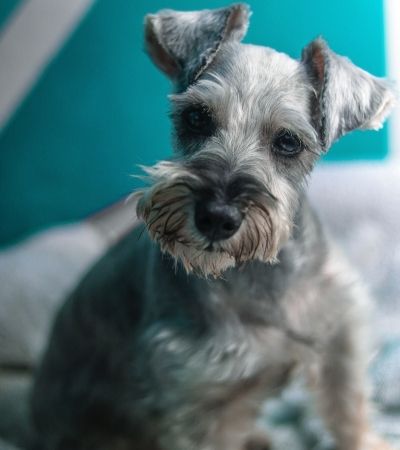 While the hypoallergenic Schnauzers are great for those suffering from allergies, their prospective owners should note that they do have some grooming needs. It is important to take the time to brush your Schnauzer daily. Baths are required at least once a month, but more often if your dog suffers from skin conditions or just loves to play in the mud on your daily walks.

Additionally, it is important to keep a close eye on your Schnauzers nails, skin, ears, and teeth to head off any small ailments before they turn into much bigger problems.

There are a couple of health concerns that should be taken into consideration. Schnauzers, particularly the miniature kind, have a tendency to develop Urolithiasis, which are stones in the kidneys or bladder.

Additionally, Schnauzers also tend to develop an ailment known as Legge-Perthes Disease. Also known as Legge-Calve-Perthes Disease, or LCPD. This disease affects the top of the femur, which in turn can cause issues with hip and joint pain. There is no full understanding of what causes this disease, though it is thought to have to do with blood flow issues. Treatment of this disease consists of surgery, pain management, and regular physical therapy.

Standard Schnauzers are rare and suffer few health issues. However, miniature Schnauzers are known to be susceptible to eye problems, heart disease, and dental disease. Hormonal diseases such as hypothyroidism and Cushing’s disease have been noted in this breed as well. Many hereditary diseases can be avoided by selecting your Schnauzer from a reputable breeder! Also, maintaining your pet’s weight and providing them with good quality dog food and plenty of exercise can greatly reduce their risk of developing disorders and diseases! 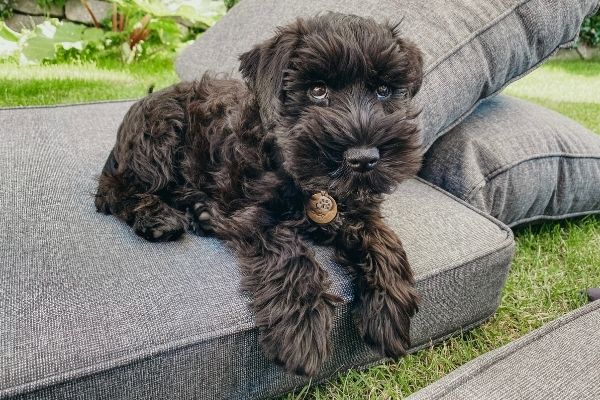 The Schnauzer, an incredibly family friendly and adorable dog, is an awesome choice for those who are looking for a small, medium, or large hypoallergenic terrier-type dog. There are a couple of drawbacks of this breed that should be considered, but overall, the Schnauzer is a fantastic option for families or single folks who are looking for an active breed to be a loyal companion.

Miniature Schnauzers make great apartment dogs, as long as you give them enough exercise each day.

Are Schnauzers Good With Kids?

Schnauzers, like many other terrier breeds, have wire coats. These coats are non-shedding and low maintenance.

Yes! Schnauzer dogs are in the Terrier Breed Group.

Are Schnauzers Easy To Train?

Schnauzers are relatively easy to train because they are smart, but they can also be a little stubborn and determined. Establishing yourself as the alpha dog from the outset will help in training your schnauzer puppy.