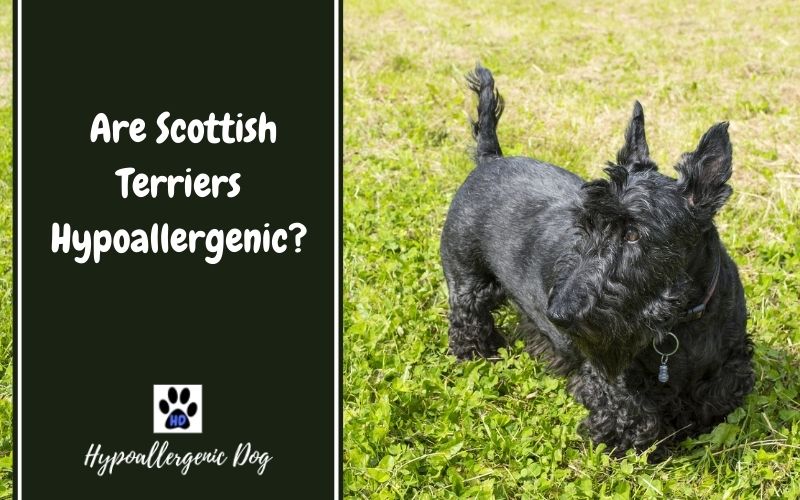 If you’re looking for a spirited side-kick with an attitude problem, a Scottish Terrier might be the dog for you! These short little spitfires are very brave, very determined, and very loyal. It’s easy to confuse a Scotty with a Schnauzer. If you do, they’ll almost always forgive you for it. Maybe. Sometimes. Well, let’s be honest – like any proper Scot, these little dogs have fiery tempers. They might be quite a bit shorter than a Schnauzer, but they’ve got double the spunk!

Yes! The reason these guys are hypoallergenic is because Scottish Terriers barely shed (if at all) and they don’t drool much either. Their beards can get gross though. Usually, people that have dog allergies are actually allergic to drool or dander, so Scottish Terriers are less likely to cause flare-ups. That being said, everyone is different, so you need to meet the breed in person. Even then, individual dogs can be different too. Lastly, you’ve got to make sure to keep up with a Scottish Terrier’s grooming or they might start to bother your allergies. If you’re allergic to Scottish Terriers, you might consider checking out Schnauzers instead.

Short and stocky. They can actually come in a ton of other colors, like white, wheaten, brindle, and grey, but most of the ones you’ll see will be black. They are really low to the ground, and when their coats are cut in the “fancy style” they look like black brooms with a dog face. The face in question has scruffy, bushy eyebrows, a wiry beard, and cute foxy little ears that are stretched out to be extra tall. They have stubby serious looking tails that often stick straight up or curve slightly over their body. 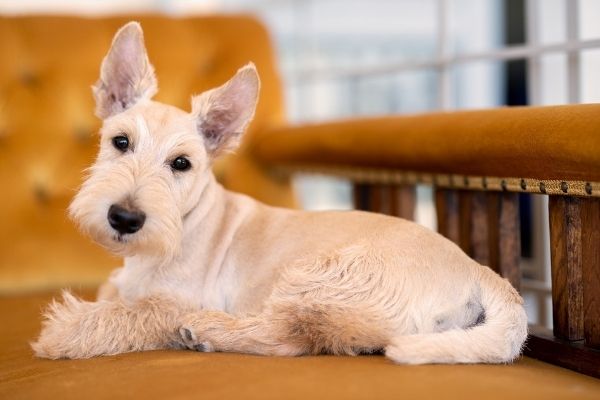 Is the Scottish Terrier right for me?

Probably not! Just kidding. Sort of … What you need to understand about a Scottish Terrier is that they’re the bravest, most loyal maniacs you will ever meet. Scotties will take to you, forsaking all other humans. They don’t consider you a god though – they’re not that revoltingly sappy, hero-worshipping Border Collie your neighbor brags about. Scotties were born to be your boss, and it’s your job to fight for your own equality. Don’t think you’re going swimming with a Scotty. Drop one in the water, and they’ll sink to the bottom like a rock, and then you’ll be the one drenched from head to toe after you’ve had to rescue them. Dog parks aren’t the best place for a Scottish Terrier – they’re always on the look-out for bad guys and have no issues picking fights with other dogs.

Okay so, is that Scottish Terrier a good dog for me, or not?

If you have to ask that question, I’m going to go out on a limb and say that they’re not. Scottish Terriers require a lot of experience with dogs and a good understanding of dog behavior. You also need experience with training and socializing puppies. If you don’t know enough about dogs yet that you’re not really familiar with the Scottie’s terrier personality-type, then you’re definitely not ready for a Scottish Terrier.

How energetic is a Scottish Terrier?

Very! Although, they’re not yappy or goofy. So they’re enthusiastic and eager for exercise and a good walk, but your neighbors won’t hate you for having an endless yappy-dog bark track playing in the background every time you leave the house.

Yes! But once you have one, you’ll start wishing they weren’t. They use their intelligence to reason out why they don’t have to listen to you, and how there’s nothing you can do about it.

Are Scottish Terriers easy to train?

No. Scottish Terriers are very difficult to train. You have to start training them when they’re puppies, and they need a lot of socialization.

No. Scotties are known to pick fights with other dogs, and they can be too rambunctious for little kids. They’re aloof with strangers because they treat every new human with a healthy amount of suspicion. They’re cat terrorizers, and they would love to bring you back some small dead animal if they ever get the chance. Have a rat infestation? Get a Scottish Terrier. (No, I’m kidding, don’t do that.)

Are Scottish Terriers good for apartments? 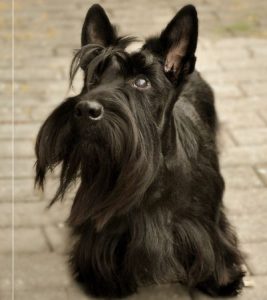 Yes. Their small size means that apartment complexes that allow dogs will accept them. They also adjust well to living in smaller spaces, so long as you exercise them properly and give them mental stimulation. They don’t really shed, so that helps keep your apartment clean, and they’re not really yappy, so your neighbors won’t hate you.

Is the Scottish Terrier a good dog for kids?

With training. To be honest, Scottish Terriers can be a really fun dog for older kids because they’re durable and enthusiastic. That being said, they’re really powerful dogs – they can pull a kid right off their feet. They’re also rough when they play, and they’ll get an attitude about being pushed, pulled, or otherwise poorly treated. You need to socialize them with a lot of kids when they’re still a puppy, and they’re really not great dogs for kids under the age of 7.

How do you groom a Scottish Terrier?

Here’s what you’ll need : A soft bristle brush, and a long-toothed comb. Comb your Scotty’s long hair with a long-toothed comb, and brush their short hair with the bristle brush, about twice a week. Once every two months, you’ll want to take them in to get their coat trimmed by a groomer. When you brush their hair, be sure to clean out their ears with a dark cotton ball, and brush their teeth. Then you’ll just want to trim their nails about once a month, and you’re good!

How much do Scottish Terrier puppies cost?

$800 – $3,000. Honestly, you’re really not going to find many (if any) purebred dogs from GOOD breeders that go for less than $800. A good breeder has a lot of overhead, and at that price ($800) they make very little – it’s really a labor of love. Bad breeders will cut all sorts of corners so they can sell puppies for less. Scottish Terrier puppies start costing a lot when they’re bred from dogs that have won awards in dog shows. A show-quality Scottie will cost you somewhere in the ballpark of $2,400. Not all Scottish Terrier puppies born in a litter from award-winning parents will be show quality.

Where can I buy a Scottish Terrier?

Regardless of whether you want to buy a puppy from a breeder, or you want to rescue a Scottish Terrier, the best place to start your search is here : https://www.stca.biz 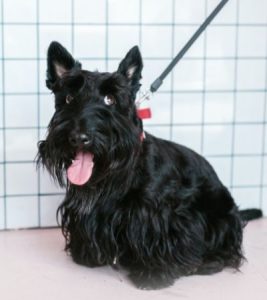 What’s the difference between a Scottish Terrier and a Schnauzer?

The difference between a Scottish Terrier and a Schnauzer in Size :

Scottish Terriers are small – about as tall as a sheet of paper. Miniature Schnauzers are the smallest Schnauzers, and they’re 2-4 inches taller. Schnauzers also come in two other sizes : Standard Schnauzer, and Giant Schnauzer. Scotties are always small.

The difference between a Scottish Terrier and a Schnauzer’s personalities :

The difference between the Scottish Terrier and the Schnauzers county of origin :

The top 5 things that make Scottish Terriers and Schnauzers different