Could Bull Dog Allergies Be Troubling your Furry Friend?

Bull Dog Allergies – Does My Bulldog Have Allergies?

Bull Dog Allergies such as skin and food sensitivities are unfortunate conditions this loving and courageous breed is susceptible to. Their allergies can be caused by a range of triggers such as environmental aspects or even food and gut-related issues, but many allergies can be related to genetic or inherited problems.

Both these types of allergies have separate symptoms and treatments and sometimes will require treatment through over-the-counter medicines. But if you learn to spot these symptoms in their early stages, then at-home prevention can be just as effective and keep your dog healthy and happy without costly vet bills. 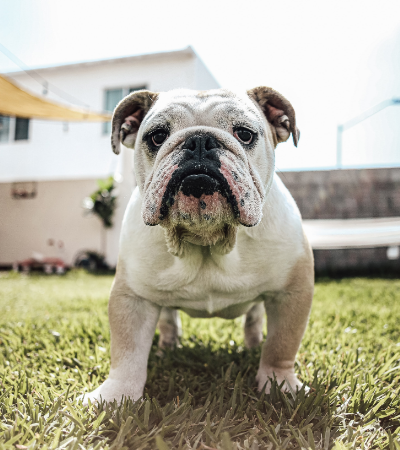 Bulldog skin allergies are some of the most commonly reported issues with their short coat and stature making them an easy target for irritants to get onto their skin. Your bulldog may also be experiencing allergies to fleas, mites, and pollen that they can pick up from the ground.

Your bulldog’s skin allergies may be a recurring issue and spotting the symptoms early is one of the best preventative measures you can take to prevent any uncomfortable side effects that come with this nasty condition. Some of the most common symptoms of Bulldog skin allergies are:

Bulldog allergies typically appear on areas such as their paws, legs, ears, stomach, and face and will appear to be red and irritated at first. You may find it difficult to see the redness at first due to the skin folds and wrinkles they have over their body, but these warm areas are a perfect breeding ground for issues such as yeast infections to grow.

These infections can also occur within your bulldog’s ears due to the folds trapping an accumulation of dirt, oils, and ear wax.

The eyes and ears will be the most common locations where you can spot an allergic reaction in its early stages through redness, weeping, and persistent itching. Excessive itching can lead to more severe allergy symptoms such as permanent hair loss, dandruff, and painful flaky skin as well as even damaging your pups hearing if left untreated.

How To Spot A Bulldog Food Allergy

Your bulldog’s food allergies can be commonly split into two issues, intolerances and allergies. You may be surprised to discover your pup has formed an allergy to a food that they’ve never had issues with in the past, but this is what often catches many owners out.

Your Bulldog can form an allergy or intolerance at any point in its life so you mustn’t rule out a food-related issue and assume that it is an environmental factor to blame.

The most common symptoms of a bulldog food allergy are:

Reoccurring ear infections and persistent itching and skin lesions or bumps can also point to a food sensitivity/ allergy. Mild cases are often the hardest to spot as the symptoms can be less frequent and put down to several other causes such as one-off occurrences.

Many ingredients can cause issues in your dog’s diet but the main ones include dairy, chicken, fish, meat, wheat, soy, or corn but can also be related to specific additives and colorings in their food.

If you leave an allergy or sensitivity to food unchecked then it can develop into a much more serious problem such as gastrointestinal issues or even infections. 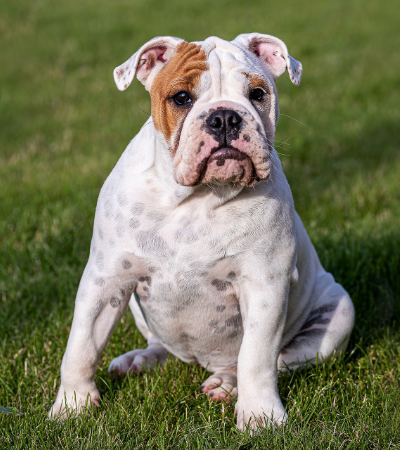 Do Bulldogs Shed a Lot?

We all know that allergies can cause your Bulldog to shed more due to the persistent itching and irritation to their skin, but how much do bulldogs shed?

The bulldog is considered a non-hypoallergenic breed and this is due to the fact their short coat is prone to shedding during all points of the year, but especially during the warmer months where they are inclined to large blowouts to keep themselves cool.

There are several variations of Bulldog from French, American, Miniature, and Australian but all have similar short, smooth, and glossy coats that can vary in a large range of colors.

Although their shorter hair makes them a low maintenance dog with easy grooming needs, this short hair also has a short growth cycle which means it falls out much quicker making them a moderately shedding breed.

How To Stop a Bulldog from Shedding

If you suffer from bulldog allergies then this breed may not be the best choice for you, but there are ways you can help prevent and minimize the amount of hair your bulldog sheds.

The most overlooked method to reduce your Bulldogs shedding is regular brushing. By brushing their coat every week you are removing the loose and dead hairs before they have a chance to spread across your home.

You may be surprised to know that brushing them can also prevent future shedding! Spreading their natural oils across their coat prevents dry and irritated skin from forming which is one of the main causes of excessive shedding in any dog breed. It can also be a great way to prevent any build-up within the folds on their skin and provides a great opportunity to clean their ears and prevent future infections.

Deshedding tools are designed to remove the hair deeper in their coat instead of just brushing the surface of their body and can create the best results during the months when they seem to be shedding more frequently.

Another way to help stop your bulldog’s shedding is to make sure you give them regular baths using moisturizing and soothing dog shampoos as well as applying coconut oil to their dry skin to keep them in the best condition possible!  Excessive bathing can create more problems so be sure to not overdo it and only bathe them when their skin looks like it could do with a good clean and deep moisturizing.

A healthy diet is essential to giving your bulldog a long and happy life, so you may want to make sure that the food you are giving them is nutritionally complete and contains the right amounts of vitamins and nutrients for their age, weight, and conditions.

You could also look into introducing a probiotic that is proven to increase their gut health and can even alleviate some of the issues your dog faces if they are related to an unbalanced gut. We’ve gone into more detail about the benefits and best probiotics you can get for your pooch.

Remedies for Your Bulldog’s Allergies

Treating your Bulldog’s allergies when you first spot them is the best way to prevent further irritation and the risk of infection.

If this happens then your vet may prescribe antihistamines to stop the itching or give you a collar/ cone for them to wear so they can’t create any further sores and damage to their skin.

Oral antibiotics are also used in cases where infections are present but you must figure out the root cause of their issues.

Medicated baths using shampoos to soothe damaged skin are a great way to give instant relief to your dog. You should look for antimicrobial and antifungal ingredients to allow their skin to get a proper clean without drying them out and creating further discomfort. Regular flea treatment can also prevent irritation from these annoying pests and stop their discomfort from worsening.

How To Stop Your Bulldogs Food Allergy

If your Bull Dog Allergies to food are causing the majority of their issues then you should look into an elimination diet to help you pinpoint the food(s) that your pup is allergic or intolerant to.

A hypoallergenic diet featuring carbs and proteins that less commonly create allergies in pets is a great choice as they are derived from ingredients with a lower allergy rate. The best way to treat an allergy is to avoid it as much as possible and a regular allergy relief medication can help make the day-to-day more tolerable for your pup. 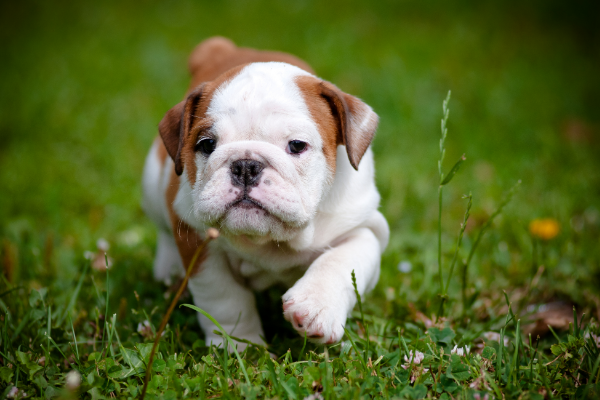 If your bulldog’s allergies have been making them miserable then it can be disheartening to see them in such a sorry state. Once your doggie starts receiving the right treatment and its symptoms improve then you will be on the road to a much happier pup!

Remember that spotting the symptoms early can be the best way to prevent discomfort as a healthy pup is a happy one!

Determining the cause of your Bull dog allergies can be a much simpler task if you seek help from your veterinarian, or have a look through our website to find the best information on how to keep you and your pup allergen-free.

What Can You Give an English Bulldog for Allergies?

The best treatment options for skin allergies include organic, hypoallergenic shampoos that will relieve their irritated skin and can reduce the itching as well as kill any fungal or bacterial infections.

Can I Give My Bulldog Benadryl?

Benadryl is a safe medication for dogs but you should always ask a veterinarian for information on dosage and frequency.

What Natural Remedy Can I Give My Dog for Allergies?

The best ways to naturally heal your dog are through a good diet, medicated bathing, and introducing supplements to create a healthy and balanced immune system.

How Can I Treat My Dog’s Skin Allergy at Home?

When you combine water and baking soda into a thick paste you can apply this to rashes to help alleviate itching and redness after about 20 minutes. Make sure to rinse it off well after this time.

Are Allergies Common in Bulldogs?

Allergies are common in most dog breeds. Most allergies appear when your dog is around six months old.