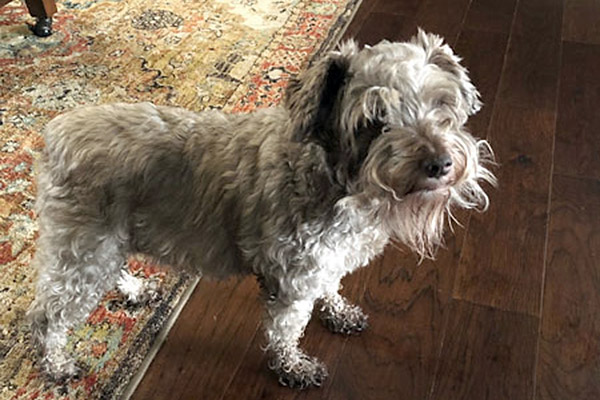 Hello, my name is Stella and I am a Schnauzer. I am told my name means “star,” which only makes sense because…I am one. I am the star of my house, much to the chagrin of the other dog who lives in my house. That’s right. It’s my house.

My sister, Marlee, she’s a schnauzer too. We often argue about who the boss is in this house – which it’s me, obviously.

Even the humans seem to think so. I am treated like royalty. When my fur gets too long, which is about once a month, they take me to go get my haircut. Nevermind that Marlee has to get her haircut too. I’m the one who gets the attention. I don’t like riding in the car very much, but I do have to say that I feel so much better when the grooming job is finished. Marlee doesn’t like riding in the car much either, but I do have to say that I handle it better than she does. I stick my head out of the window when my humans will let me, though I’m often so wound up that I will try to jump out of the car if the window gets too low or the car gets too still.

Editor : The mini Schnauzer I dog sat for didn’t like car rides either!

I’m an indoor and outdoor dog, meaning that I live most of my life inside of my house and only go outside to go to the bathroom or to go out and play. I’m fine with this arrangement so long as I have plenty of room to run. My energy sometimes gets the better of me when I’m inside for too long, so it’s important that I get to go out often so that I can run around; but the backyard isn’t just for running. It’s for guarding too. I don’t like when people walk by my fence or when there are dogs next door. I like to protect my yard, my house, and my humans. It sounds like a lot to take on, but when you’re a star like me, it only comes naturally.

Because of my small size, I don’t have to be fed a lot of food. You don’t keep up a figure like mine by pigging out all of the time.

I am personally kept on a feeding schedule, or at least that’s what my humans call it. Sometimes they are too slow in getting my food, and boy do I let them know about it. No matter how much I drag or flip my bowl around, it just doesn’t seem to get into their heads what I’m wanting. And then they do some barking of their own, though I often don’t understand them. They sound like they’re trying to talk my language, but they just can’t get the words right. I try to work with them on it, but to no avail. Poor things. That’s why I make sure to rule my house fairly. Otherwise the other dog here might walk all over them.

Well I’ve got to run for now. Marlee is laying by the food again, and I need to remind her who the actual star is around here. She might be older, but let’s be true to ourselves here: I am cuter, smarter, and of course…I’m the star!

Stella is exactly what I would expect from a Mini Schnauzer! They all seem to have a bit of a bossy streak, but I think their energy levels can vary a lot. We have some other articles owners have written about their miniature Schnauzers that have some more info. Ace’s article (here) goes into more detail about grooming and quirky behaviors. Iggy (here) is an article I actually wrote myself after dog sitting for a miniature Schnauzer.