One Funny Pup! Daisy the Cockapoo! 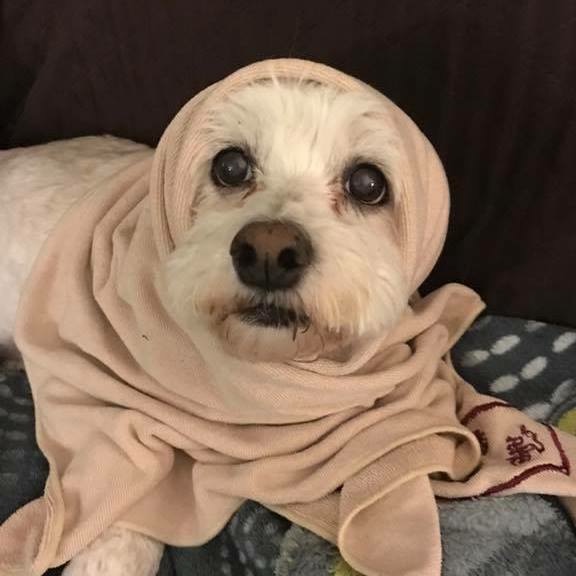 Daisy the Cockapoo is the craziest dog I have ever had as part of my family!

I have had my Cockapoo, Daisy, since she was six weeks old. Deciding to get her was the easiest decision my family and I made, as she was super spunky and active! 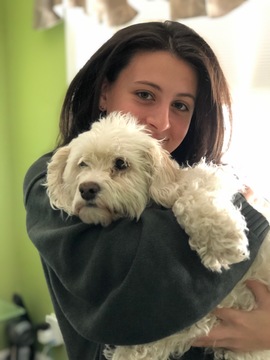 When Daisy was a puppy, she had a very energetic and creative imagination. This, coupled with the fear of her crate, led to some pretty interesting surprises. I used to tie a red bandana to the side of her crate so she could play with it when her anxiety spiked.

One day, after situating Daisy in the bed of her crate, I left for work. When I returned four hours later, I unlocked my door only to find a winter wonderland and Daisy’s crate collapsed, but no Daisy!

She somehow managed to…
Get her crate to fold in on itself,
Escape,
Get into the bathroom,
and pull an entire roll of toilet paper off the roll and around the house!

Once she completed this, she must’ve sat and shredded the paper across the whole entire house. It looked like Christmas in July! White toilet paper was EVERYWHERE! I couldn’t help but laugh hysterically at the sly look on her face when I found her under a table chewing on the brown toilet paper tube. Hilarious!

To test how Daisy succeeded to escape, I set up the crate once again, put her in, and watched as she gnawed and tugged at the red bandana until one of the walls fell! That’s when I learned never to attach anything to the side of her crate again!

I guess this is where I should’ve assumed Daisy’s hidden love for snow. Considering the winter wonderland that she created all throughout my house, I was crazy for thinking she would hate the snow!

For reference, Daisy hates the water. She gets anxiety when it rains and avoids it as much as possible.

When it’s time for her bath, I have to bribe her with a treat and comfort her the whole way through. She loves to run around after a bath, shaking and getting all of the water off her hair! It is for this reason I had assumed she would absolutely hate her first snowstorm. By the time January rolled around, Daisy was almost a year old and had never been outside in the winter. A blizzard was expected with snowfall predicted as up to 14 inches! It was one of the worst storms we’ve had in my town for years. Knowing I had a pup who hated water, I took Daisy out to use the bathroom right before the snow started. Of course, a young dog can only hold their bladder for so long. The next morning, it was a REAL winter wonderland outside this time! Daisy needed to go out, badly. I decided it was worth the risk! I slowly opened the door, and as a gust of wind came in, Daisy sprinted out! She ran outside, jumping and playing in the snow. I almost couldn’t find her, since her white hair blended in when she sunk into the almost two-foot-deep snow. I went outside to look for her, and as I approached, she jumped right out at me and ran around my feet just begging to play. We ran around for about a half hour, and when she got tired out, Daisy came prancing back inside my house with an adorable patch of snow on her nose.
From then on I knew to never underestimate Daisy – she is full of surprises!

Editor : We’re sad to tell our readers that, as this post came due, Daisy’s time came too. Daisy’s girl contacted us with this sad, sad news, shortly before this post was scheduled to go live. Our hearts go out to Daisy’s family, and all who knew her well. Wherever the next great adventure may take you, Daisy, we hope there will be plenty of winter wonderlands.

Interview Questions for Daisy the Cockapoo!

Does your Cockapoo get along with cats?

Daisy does absolutely NOT get along with cats. She has chased many strays around the backyard and goes crazy when she sees one through the window. I believe if we raised her to be familiar with cats she would not have this reaction, but since many people in my family are allergic to both dog and cat hair – hence the hypoallergenic dog – we couldn’t have cats around.

Is your Cockapoo friendly to kids?

My Cockapoo is very friendly and kind to children. I have a lot of little kids in my family, and Daisy is gentle with all of them. When they try to feed her, she takes the food from their hands softly. Also, Daisy has a unique sense of protection over the kids – if she sees someone tickling them or approaching them, she will place herself between the child and adult.

Is your Cockapoo a good pet for elderly people?

Daisy is a great pet for the elderly. Similar to children, she is very gentle and does not require a lot of maintenance. When my aunt was sick with Alzheimer’s, Daisy laid by her feet every day.

Is your Cockapoo friendly to other dogs?

My Cockapoo is friendly and non-aggressive with other dogs. In certain circumstances, she does not like when male dogs try to approach her from behind.

How long did it take to potty train your Cockapoo?

Not long. Daisy was a fast learner and only took about 3 months to potty train.

Is your Cockapoo easy to train?

Yes. My Cockapoo is always easy to train. I solely potty trained her and taught her how to do many tricks. Even in her older age, she was able to learn new tricks like “crawl”.

Is your Cockapoo very obedient?

Yes. Daisy is very obedient and listens to my family and I. For example, she stays when I tell her and has a tame temperament when I signal her to be. 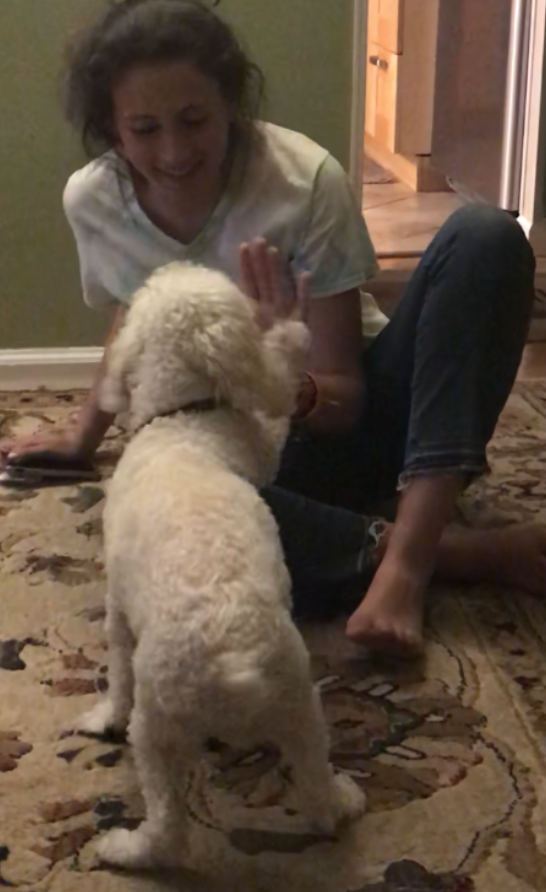 Does your Cockapoo bark a lot?

Yes. Daisy does bark a lot. She thinks she is a huge guard dog and loves to protect the door of my house.

Does your Cockapoo dig a lot?

No. My Cockapoo does not dig at all. She does, though, oddly rub her face against the cement on dead worms.

Does your Cockapoo chew a lot?

Not really. Daisy used to chew a lot when she was a puppy, but it slowed down as she’s aged. Her chewing was limited to toys, though.

Does your Cockapoo get separation anxiety?

What kind of behavioral problems does your Cockapoo have?

Daisy has multiple behavioral problems, but they are not too severe. These include barking and whining, begging and jumping up.

Does your Cockapoo love to cuddle?

No. My Cockapoo hates to swim and is fearful of the water. Even when it comes to bathing her, she gets anxiety and shakes.

Sort of. She enjoys playing tug more than she does playing fetch. By this, I mean that when you throw a toy, she retrieves it and brings it back, but doesn’t often let it go. She loves to tug on the toy while it is still in your grasp, and when it slips out from her teeth, she patiently awaits another throw.

No. Daisy does not like to chew on bones.

How often do you have to groom your Cockapoo?

Weekly. Daisy gets knots in her hair and needs brushing about once a week. She gets bathed about once a month as well.

How much does your Cockapoo shed?

Rarely. My Cockapoo barely sheds – perks of having a hypoallergenic dog is not having so much hair to clean up!

Does your Cockapoo drool a lot?

No. Daisy does not drool a lot, except when she gets nervous. This mostly happens in the car or at the vet.

How much exercise does your Cockapoo need?

A lot. Daisy needs at least an hour of exercise a day. She loves walks, and if you do not take her out or play with her, she will get jumpy and impatient.

Does your Cockapoo have a lot of health problems?

No. My Cockapoo has been healthy until recently. Daisy is now 13 years old and unfortunately coming to the end of her life. Recently, she has had slipped disks in her back causing her pain to walk, but these healed. Daisy has now developed growths inside of her lungs. She was only expected to live until the end of October, but she is a miracle dog!

Is your Cockapoo playful?

Yes. Daisy is extremely energetic and playful. She loves to run around and play with her toys. Daisy’s favorite toy is a stuffed squirrel that squeaks when she bites it.

Is your Cockapoo energetic?

Yes. My Cockapoo is energetic but she will tire herself out well with all of her running around, and then loves to cuddle up on the couch with me. 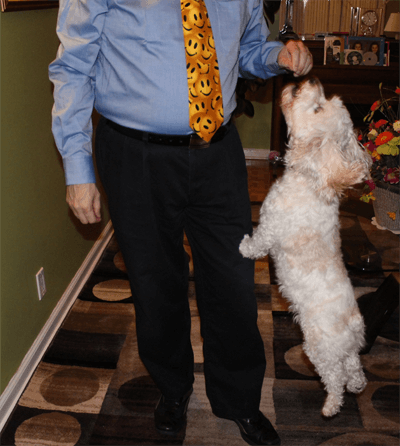 What is your Cockapoo’s cutest quirk?

Daisy’s cutest quirk is the way she stands when she’s excited. First, she will wag her tail (which is just a stump since it was cut after birth). She will then go into a downward dog stance and growl or whimper until you notice her. When this happens, she’ll jump up and run to you full of love and energy. It is absolutely adorable!

What makes your Cockapoo the happiest?

Love and food! My Cockapoo is the happiest when receiving love, but food is a close second! Daisy is a sweet girl who loves to snuggle and keep me company. She gets so excited when it’s time to relax. In the mornings, Daisy wakes me by licking my hand and runs to the basement door to go in the basement and hang out before our days get started.

My Experience owning a Cockapoo

What surprised you about owning Daisy the Cockapoo?

Her empathy. I was surprised to know that Daisy had a high level of emotional intelligence. She could seemingly sense when you were upset, sick, or in pain, and be there to lend some emotional support.

What kind of person do you think Cockapoos are good for?

I believe the best person for having a Cockapoo has a good amount of energy. Families are good fits as well, as they are very kind to children and elders. They’re overall amazing for anyone who has the time and patience to train them well.

Would you get another dog of this breed?

Yes! I would definitely get a Cockapoo again. They are extremely intelligent, caring, and lovable dogs.