The Joys of an Energetic Miniature Labradoodle 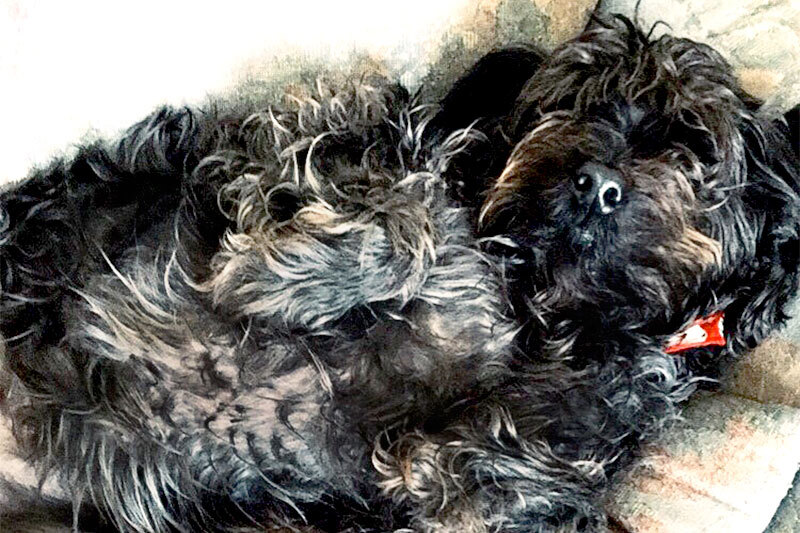 Phillie is a seven-year-old miniature Labradoodle with crazy black and brown curls and a love for life.

She is energetic and loves getting into all kinds of mischief, but all in the name of fun!

My family adopted Phillie. When we saw the litter, Phillie was our immediate favorite of the puppies. She ran right up to us and nuzzled our legs with her soft, wet little nose. 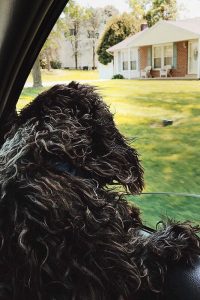 On the day we picked her up, she rode home in the backseat between me and my sister in a beer box. My mom was so excited every time her fluffy head popped up and peered around. That was also the day that we learned Phillie got carsick if we didn’t let her stick her head out of the window. She got sick about halfway home, much to me and my sister’s dismay and to this day has to have her head out the window, no matter the weather, unless we want her to throw up in the car.

At six weeks old, Phillie was about the size of a bag of popped popcorn. Her hair was soft and curly and needed to be brushed once a week. At first, she resisted hard bristle brushes and would cry and wriggle around, but once we bought one of the gloves that had softer bristles on the palm, she would let us brush her without fighting. When she was little, Phillie would not eat out of her bowl but would only eat kibble out of my hand.

From the start, Phillie was full of energy and bounced from wall to wall.

She was a little furball that rocketed between our legs while we tried to walk around the house. Having lived with an Amish family, she had never seen a television before, so she loved to sit in front of it while my dad watched baseball games and follow the ball with her head as it was thrown around the infield.

For the first few months, we kept her gated in our kitchen in case she had an accident. She also had a tendency to chew up anything if we weren’t watching her carefully enough. It didn’t take Phillie long to learn how to climb over the gates. I would leave the kitchen for one second to go to the bathroom and open the door to find her sniffing around the hallway.

We decided we needed to see how she did it.
My sister and I sat in the living room and faced Phillie on the other side of the gate. She was confused. Why would we sit out there when she was in there and needed attention? After some pacing and whining, she decided that was enough. We watched in awe as she placed her little paws in the holes of the baby gate and wriggled her pudgy body right over the top until she plopped into the living room. Jumping up from where she had fallen on her back, she ran over to me and my sister very pleased with herself and excited to be reunited with us. Phillie managed this feat over and over again, even when we tried stacking two baby gates on top of each other. She didn’t seem to realize we were trying to help her from being stuck in the laundry room or the crate while we were away. 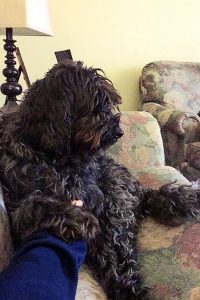 My family chose to crate train Phillie. She did well in the crate and didn’t cry or bark much at night unless she heard someone walk past and saw the opportunity to guilt one of us into letting her out for a little bit while we made a midnight snack. She loved to snuggle up on our laps, which she still does, even though she is a lot bigger now, and her legs tend to flop over the sides.

Now seven, Phillie still loves to run around like a puppy. Gates are no longer her obstacle, but the screen door on our deck was. The door has a metal grate on the bottom but is open with a screen on top. With a beautiful running start, Phillie managed to jump high enough to clear the bottom and burst through the screen one day during dinner. These kinds of physical accomplishments are not unusual for Phillie. She is one of the fastest dogs I have ever seen and can jump over five feet in the air. One time, I was making a sandwich for lunch and purposely held it as high as possible, and she proceeded to jump up and snatch it from my fingers.

She is the Best Dog!

Adopting Phillie was the best decision my family has ever made. She is so full of love and enjoys every second of every day. She is my best friend and brightens my days with her goofy smile and warm cuddles.