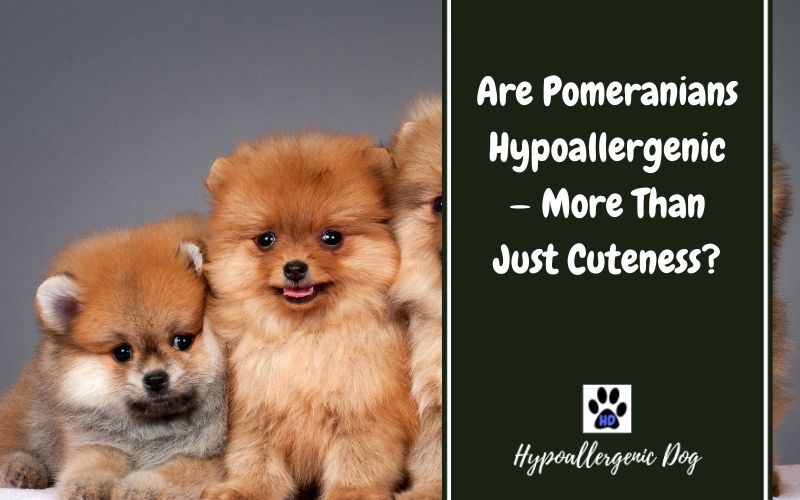 Unfortunately, these playful pooches don’t have the qualities to deem them hypoallergenic or suitable for those with allergies to dogs.

Pomeranians are thought to be distant relatives of much larger working dogs from the Arctic — this could explain their thick, dense fur. The breed originated in Pomerania, Northern Poland, off the Baltic sea coastline. Over the years the breed, which is also nicknamed ‘Pom,’ has decreased in proportion and is now rather small with many classed as teacup-sized.

These pooches are a popular choice of companion and are currently ranked within the top 20 most popular breeds in the US. Pomeranians are well known for their thick coats and it’s recommended that they’re brushed regularly to remove any debris or dead hair.

Even though their shed level is relatively low compared to other dogs, they typically blow out their coats during seasonal changes — from winter to summer months, which can make them less desirable for people with dog allergies.

Although the adorable teacup Pom is desired by many, this breed has been manufactured over the years to produce such a tiny little beauty. Hence, it begs the question, ‘are teacup Pomeranians hypoallergenic?’There is no doubt these dogs are a lot smaller than the usual breed, however, they’re still likely to shed. With this in mind, you may be surprised that some allergy sufferers can tolerate the small amount of fur they lose.

Poms are known for their energetic, feisty behavior and are naturally curious about their environment. They love being the center of attention, but with their headstrong character, training these little furballs can prove to be a fairly challenging task!

The first Pomeranians weighed between 20 to 30 pounds. However, they were scaled down as Queen Victoria wanted to turn these big beauties into cute little lap dogs.

For a synopsis of the details below, skip to our Pomeranian breed summary further down the page. 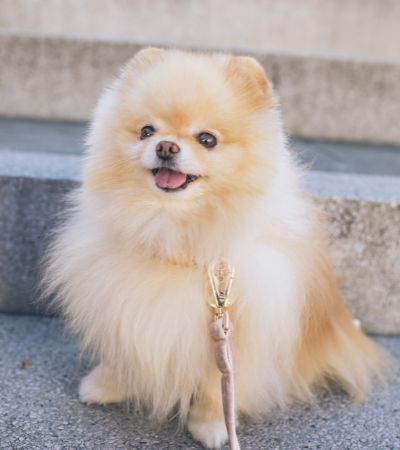 What’s Coming up on This Page?

If you have specific questions about the Pomeranian dog breed, check out our FAQ section. 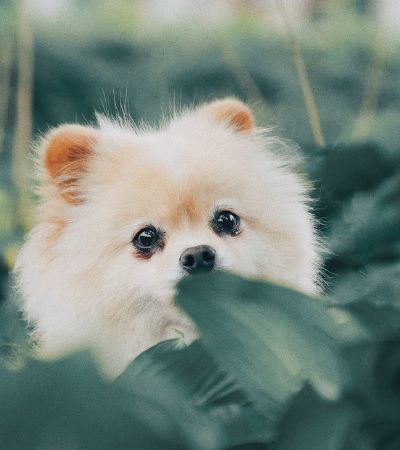 The adorable Pomeranian is well known for its small stature. Typically weighing around 3-7 pounds and standing at a height of 7-12 inches, these bow-wows are super simple to pick up and carry. Both males and females fall within these weight and height ranges, with very little if any difference between them.

Pomeranian dogs are known for being smart, curious, and energetic balls of fluff. This can be the perfect choice for a family pet that’s less intimidating than a larger dog. This pampered pooch loves to be the center of attention, thus will fit in well with families who can oblige.

However, bear in mind that families with smaller children may not be the best home for a Pom. They need to be handled carefully and younger children may think of them as a toy — like their appearance would have you believe.

Pomeranians have a distinctive coat. They have a puffball of fur around their chest and neck, and their bodies have a thick double coat, made up of:

These pooches require regular grooming as when they blow out their fur, they can become matted easily. A good routine consists of regular brushing and bathing. This will help keep their coats fluffy and silky.

If you suffer from allergies this breed isn’t recommended, they will shed fur around the house. This loose fur can carry allergens such as dander or pollens which can trigger an allergy spike.

Pomeranians are typically known for their playful extroverted character. They are intelligent and loyal to their families but don’t let their cuteness fool you! Armed with a yappy bark, these tiny personalities believe they can take on even the biggest dogs.

These pooches are sociable characters. Their bold presence makes them the perfect playmate for anyone interested. However, they must be trained appropriately around children.

Pomeranians should also be well supervised when with young children as their small stature could leave them open to getting injured in an overactive environment. This can leave them feeling afraid and inevitably aggressive/fearsome of little people.

Encouraging Good Behavior in Your Pomeranian

Pomeranians can be highly sociable pets. Their persona, however, is much bigger than their size. They have the personality traits from their ancestors ‘the German Spitz.’ These were very large sled dogs and you can see that Pomeranians possess a similar outgoing energetic personality, much like their distant relatives.

With all this bubbling energy these bow-wows must be trained from an early age to expel what could become aggressive behavior. They generally respond well to positive reinforcement but this has to be a regular occurrence for it to take effect.

One of the most important factors would be socialization. Taking your new Pom to places where it will meet other people and other dogs can be a valuable tool to prevent aggressive behavior. Some Pomeranians can be cheekier than others, which is why many owners attend structured dog classes as well.

These dogs carry a loud yappy bark. This can become a troublesome trait, so getting this under control early will help you and your neighbors further down the line.

Grooming all dogs is a part of the care an owner takes responsibility for. Owners of the Pomeranian breed need to understand that it’s essential to keep a regular grooming routine to keep the coat at its best.

Pomeranians have an adorable pom-pom appearance. Their dense undercoats and wiry top coats mean that they need frequent brushing to prevent matting, especially during the months where they shed their fur. Brushing should be done at least three times per week but it’s advised to be done more regularly during the blowout months.

This beautiful breed should be bathed as often as every week. They must not be left longer than three weeks. Washing their coats regularly will help detangle any matts and prevent their skin from becoming sore. Falling into a good washing routine early helps with behavior in the bath and sets the core foundations for healthy skin and fur.

Find out what equipment you will need for grooming your dog.

This breed is known for certain medical issues, including: 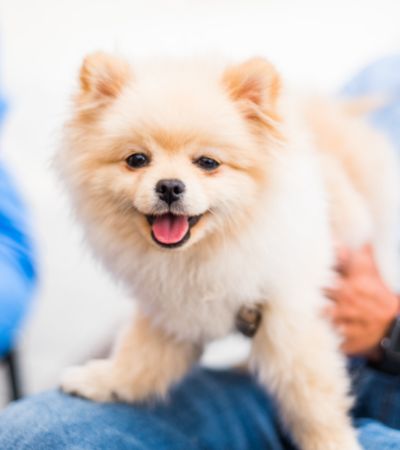 Pomeranians are beautiful creatures. Perfect for anyone who wants to have a bundle of fluff running around, and perfect if you prefer a smaller than average dog. Unfortunately, due to their incredible coats, they aren’t the best breed to own if you suffer from pet allergies!

That said, all may not be lost if you want a dog similar to the Pom! Check out these breeds, they bear the same characteristics as a Pomeranian but are allergy friendly. Whether it’s their personality traits or a thick body of fluff, you can be sure that they would suit any home that requires the hypoallergenic touch!

Suffering from pet allergies is no joke. Unfortunately, choosing the Pomeranian breed is not the best choice for you. Their coats are doubled up and they shed, albeit at a low level.

That said, we’ve mentioned some spectacular alternative breeds that could become a part of your family.

Spend time researching hypoallergenic bow-wows, as many allergy sufferers are affected in different ways. And, if you think you have found ‘the one,’ visit them regularly to establish whether your allergies are affected.

So, in conclusion, are Pomeranians hypoallergenic? In a nutshell, no. But there are many allergy-friendly breeds with wonderful wagging tails dying to meet you.

Are Pomeranians Good for People Who Have Allergies?

To give a straight answer — no! However, these puffballs are one of the better breeds. They have a small stature, which means they shed a lot less than your average-sized dog. If you’re dead set on a Pom, check if your allergies can tolerate this tiny tail-wagger before making one a part of your family.

With a coat as thick as the teacup Pomeranian, it’s shocking to believe that they only shed a little. Do expect to find their fur around the house but it would never be excessive. This is something that many allergy sufferers can tolerate, although they are not considered a hypoallergenic Pomeranian.

Which Dog Is the Most Hypoallergenic?

Although no dog is 100 percent hypoallergenic, these are some of the best dogs to own if you do suffer from dog allergies:

This is a designer breed that shares many traits from both breeds but there is no guarantee that they will be hypoallergenic, like a Yorkshire Terrier. As Poms are not hypoallergenic there is a high chance that the Porkie will follow them.

What Is a Shih Pom?

This is another mixed breed — a Shih Tzu crossed with a Pomeranian. Although they’re small, cute, and extremely loyal, there is no guarantee that these dogs will inherit their Shih Tzu parent’s hypoallergenic coat.

Does A Pomeranian Shed A Lot?

Pomeranians don’t shed as much as other breeds, but their shedding is still significant. This is mainly because they’re one of the furriest small dogs around.