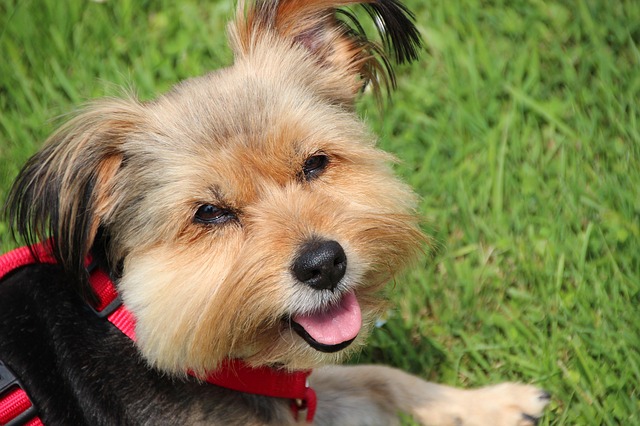 Yes! Whew – that was a short article. Glad that’s over!
Oh, you want to know more?

Like, for instance, how do we know that dogs laugh, who figured this out, and why should you believe it’s true? Then my friend, you officially have a longer attention span than most Twitter Tweeters! Congratulations!

Why don’t people believe that dogs can laugh?

It seems kind of arrogant, doesn’t it? To believe that we must be the only species capable of laughing? Well, get used to being arrogant. It’s the human way! In any case, it’s not totally unreasonable to be a bit skeptical. Animals react differently to life’s events, because they’re built differently. Just as humans can’t bark, dogs can’t make laughing human sounds! And let’s face it – it would be super creepy if they could! 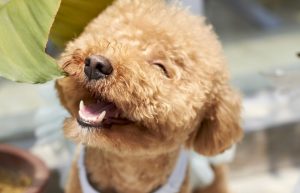 So, to know whether other animals can laugh or not, we first must define “laughing”.
Which is…HA! HAHAH! LOL! ROFL! HAHAHA!!!! — NOT!

The truth is, the actual sound we make is a fairly small part of what makes a laugh, believe it or not. In fact, laughing is pretty much one of the most insane, unsettling, inexplicable, lunatic things that humans are capable of doing without thinking twice about it. So, before we decide whether dogs can laugh, we need to realize that laughing is a lot more than making noise.

So, what is laughter?

Laughter is actually a really complex biological response. When something funny makes you laugh, you undergo this massive seizure-like episode that affects pretty much everything in your body!

For starters, your muscles contract – especially the face ones. A piece in your throat (the Larynx) half closes, which makes you huff and gasp and basically breathe like a crazy person. Sometimes, in the most extremely hilarious situations, your eyes will actually tear up and you might even get some snot action. Of course, all of this is happening to the background music of your manic laughter.

This enormous, involuntary response to humor might alarm aliens from outer space – but as far as we’re concerned, it’s all part of life. Well, our life – as humans. Not anyone else’s life…because, like, we’re special – right?

Yeah, keep thinking that. Pretty much every time we think we’re special, science comes along to prove us wrong! Laughing is no exception. Believe it or not, scientists noticed that animals can laugh quite some time ago! The reason you’re probably just hearing about it now is because scientists are also really, really bad at spreading the word – and they tell terrible jokes.

The first terrible joke-teller/anti-social science guy to discover this gem of knowledge was – of course – Charles Darwin. Remember him? He was that annoying guy you had to learn about in grade school who said evolution happens when mutated animals live long enough to make babies…

So anyways, Charles Darwin found out that chimpanzees make laugh-like sounds when they’re tickled or playing! That observation opened up a whole can of worms for future scientists, who were bored with making supernatural fruit flies and wanted to move on to more interesting stuff.

We’ll get to the dogs’ laughter in a minute, but there’s an important point here.

Charles Darwin and Jane Goodall both described the laughter of Chimpanzees to be similar to huffy breathing – a bit like heavy panting. Humans, meanwhile, make harsh, short, “ha-ha” sounds. So, Chimpanzee laughter is a little different. However, Chimps are a good stepping stone for us when it comes to understanding animal laughter. They’re similar to us biologically and socially, so it’s easy to interpret things like laughing in Chimps. Since they’re not people, they can help us to understand how other species of animals might laugh differently than we do. In this case – by huffy breathing.

Oh – by the way – the reason that other animals can’t laugh and speak the way we do is because their vocal tract is way different from ours. So, it’s no wonder they can’t laugh like we can!

The studies about dog laughter

Konrad Lorenz was a really cool guy. He was an Austrian zoologist who won a Nobel Prize in Physiology. He pretty much made ethology (the study of animal behavior), a real thing that you could actually go to college for. In his book “Man Meets Dog”, Lorenz describes what it looks like when a dog laughs.

According to Konrad Lorenz, when a dog laughs, their lips will stretch from ear to ear, their tongue comes out, and the corners of their mouth tilt up slightly. This expression of humor often follows mischievous and comical behavior – like prancing, dancing, and the tackle-then-run technique. In the doggy kingdom, the open-mouthed doggy-laugh is a surefire invitation to play, and all dogs seem to understand that.

Patricia Simonet recorded the sound of dogs playing. On the recording, they just sound like panting dogs. However, when she analyzed the recordings, Simonet found out that these bursting pants actually had a broader range of frequencies than regular dog panting. Puppies responded to the recording by romping around and playing with toys. Simonet also showed that the recording was useful for calming dogs in animal shelters.

Interestingly enough, there’s a variety of posts and articles online written by people who are now trying to imitate dog laughter. One person wrote about how she used dog laughter to relax dogs that were anxious during her dog training sessions. Another writer claims, if you do a great job mimicking a dog laugh, you can get your dog to sit up and wag their tail. Sometimes they may even come to you and join in with the laughing.

The real question is, are they laughing with you, or at you? You probably do look ridiculous!

Do dogs laugh? … My thoughts

Human laughing is (or at least should be) involuntary. Yes, yes – there are those “fake laughers” out there – but lets face it, they’re not fooling anyone!

My main issue with these studies is that they don’t really address whether dogs are controlling their laugher. If they’re not, then it would seem that this behavior is pretty much the same as human laughter in a dog body! If they are controlling their laughter though, it might be that the feelings they have when they behave that way aren’t similar to feelings involved in human laughter at all. It could, in fact, be a great example of humans reflecting their own view of life on animals.

Humans have crazy, wild episodes of laughter that make us look like lunatics. Even we humans can be a little afraid of laughter. I mean, lets face it, few things are scarier than a laughing criminal or a laughing madman, like The Joker. Do dogs laugh so extremely?

Could it be that, rather than laughing the way people laugh, dogs speak differently to each other when they’re having fun?

Do wolves laugh? Or might laughing be a trait that was unintentionally nurtured and bred into domestic dogs by their human companions? If that’s the case, then maybe these instances of “dogs laughing” are actually expressions used to communicate in a domestic world.

You know what I love about musing like that? It’s almost always a waste of time! The fact of the matter is, we don’t really have enough studies and enough research to say whether or not this thing that dogs do is similar to the way that humans laugh. I think, in time, we will.

In the meantime – the important takeaway is that this open-mouthed, doggy grin is clear evidence of a pup who is having a blast! What else matters?!