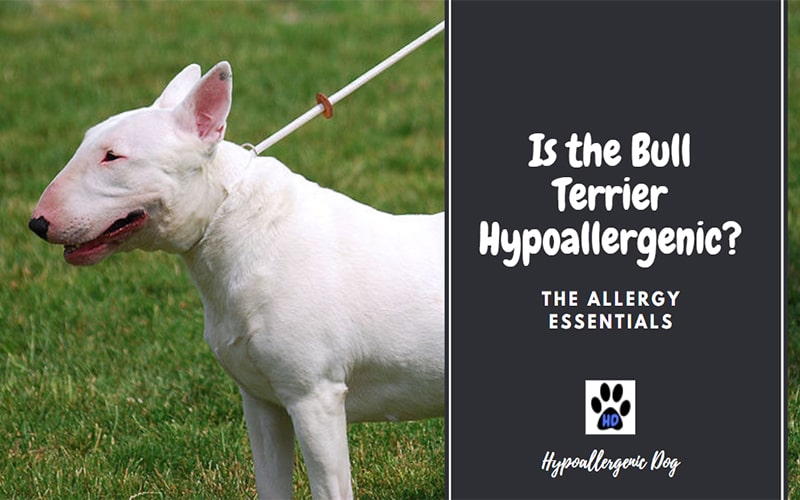 Unfortunately, the answer is no! They have a fairly high shedding rate and their hair sticks like glue to everything — including you!

Playful, strong, and affectionate, the Bull Terrier is like a smorgasbord of attractive traits.

But sadly, being allergy-friendly isn’t one of them.

Usually, there are three guilty culprits in the doggie intolerance world — saliva, hair shedding, and dander.

The first of these, poochie-spit, isn’t an issue with Bull Terriers. It’s the proteins in saliva that cause the unwanted reactions — but since these dogs don’t slobber or drool, there’s nothing to set off skin itches.

It’s the other two offenders that will send your inflammatory response into overdrive.

The shedding rate of the Bull Terrier is moderate to high — meaning that if you are susceptible, there’s a high chance you’re going to suffer. However, the issue is exacerbated by the nature of their coat.

Bull Terrier hair is coarse, short, and incredibly sticky. It adheres to clothes, your own skin, carpets, and furniture, like velcro. In fact, velcro with a substantial dollop of superglue. And, unless you have a seriously powerful pet vacuum cleaner, you’re not going to shift it easily.

Hence, everything in your home turns into an allergy time bomb.

Then, there’s the dander.

This is the dead skin cells that are shed by a dog. While all poochies naturally drop skin, in the Bull Terrier, this is higher than average. You see, these fur babies have numerous skin issues — most commonly atopic dermatitis — leading to greater dander shedding.

But, there is a remarkably surprising solution.

The Miniature Bull Terrier is hypoallergenic.

Selective breeding made it small — but it also inadvertently created a pooch with few skin problems, low dander, and a coat that doesn’t drop. 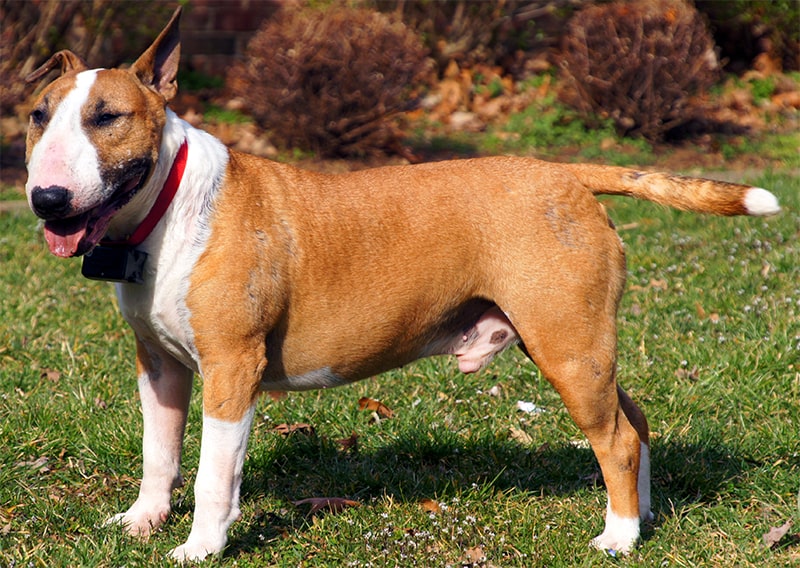 About the Bull Terrier

In Britain in the 1800s, life was somewhat boring.

With no Netflix or social media, after a hard day at work, the British had no idea how to spice up their free time. That was until someone had the idea of crossing an Old English Bulldog with an English Terrier — and allowing the resulting dog (the Bull Terrier) to maul a tied-up cow to death.

While a popular source of entertainment for the masses — some vocal and influential types considered it a rather horrible pursuit. So, after some campaigning, the government introduced the Cruelty to Cattle Act (1822) — making bull-baiting illegal.

Undeterred, the Bull Terrier owners decided to allow the dogs to fight each other instead (the British had a weird blood lust back then) — but again the persistent activists won through — banning this sport through the Cruelty to Animals Act (1835).

So, with no other defenseless animals left to kill — the Bull Terrier owners decided the only option was to breed out much of the aggression — and promote these doggies as lovable companions.

By the end of the 19th century, this pooch had become remarkably popular among high-society gentlemen. In 1885, it became one of the first dogs to be recognized by the AKC.

Characteristics of the Bull Terrier

The Bull Terrier is easy to recognize.

It has a distinctive oval — almost egg-shaped — head, with a flat top to its skull.

While most poochies have either round or almond-shaped eyes, the Bull Terrier is virtually unique — having glistening and mischievous-looking triangular eyes. Furthermore, with its erect and pointed ears, it appears constantly on high alert.

This is one sturdy dog.

Large boned, muscular, and almost square in shape — it’s the bodybuilder of the canine world. When running, it has a jaunty stride and carries its tail in a horizontal fashion.

The Bull Terrier’s coat lies flat against its body — with short, coarse, and glossy hair that has a tendency to shed. The color is usually solid white, or white mixed with:

Ok, it had a somewhat violent history — but you can’t punish them for their forefathers. After all, chances are part of your own ancestry includes some form of rape and pillage (hopefully, not too recently).

A study in 2008 concluded that the Bull Terrier (stereotypically violent) was no more vicious than the Golden Retriever (assumed to be a complete softie).

The Bull Terrier is entertaining, eager, lovable, and affectionate — making a wonderful family member. These dogs love to play — and will happily join in games with children.

Just be careful, however, if you have small toddlers.

The Bull Terriers will not mean to hurt them — but these are powerful dogs that don’t understand that their strength might be too much for your little ones.

While these pooches may have the tenacity and strength of a bulldog — remember, they’re 50 percent terrier.

Hence, although independent, the Bull Terrier is highly playful and has a huge desire for gratification. It’s not particularly a dog that wants to ‘work.’

So, when training your pooch, bear that in mind. If your lessons aren’t enjoyable for your Bull Terrier, he will become bored and learn nothing. Make it exciting and jovial — and you’ll have a keen student.

Positive reinforcement is key — giving them high-pitched vocal congratulations, their favorite toy, and (intermittently) treats. They perform well in agility and flyball — and excel in more serious situations, such as search-and-rescue, and even bomb detection.

On a day to day basis, ensure you take your Bull Terrier for a walk of around 30-35 minutes. They will happily live in an apartment — but I’d recommend adding in an additional excursion in the evening if they have no outdoor play area.

Bull Terriers are generally healthy — enjoying a lifespan of around 12-13 years.

However, they can be prone to: 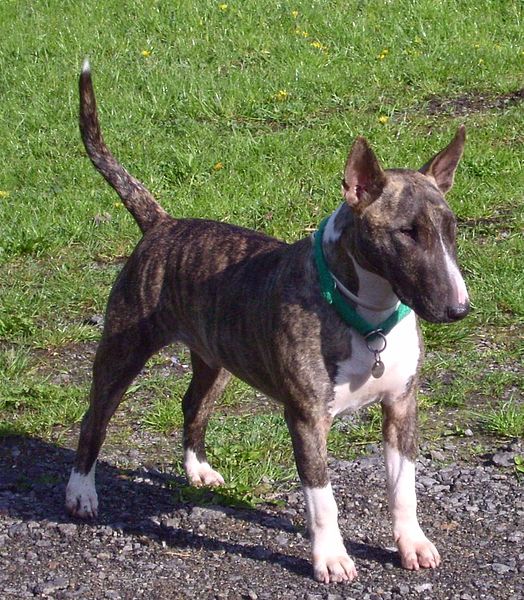 Despite its stereotypical aggressive image, the Bull Terrier is the complete opposite — loving, playful, affectionate, and humorous.

Although not suitable for the allergy sufferer — due to the high shedding rate and elevated dander count — they are ideal for apartments and mix well with kids.

And — with a little positive and fun training — the Bull Terrier can be exceptionally responsive and obedient.

Yes. The Bull Terrier shedding rate is not only significant — it readily adheres to clothing, carpets, and furniture. Thus, these are not ideal dogs for pet parents with allergies.

No. Research has shown they’re as docile as a Golden Retriever. However, early training and socialization with other dogs is essential.

No. Their reputation as an aggressive dog is completely undeserved. Bull Terriers as pets are playful, fun-loving, and affectionate, and they make excellent family members.

No. Bull Terriers are clean pooches. However, their coarse and short coat can attract dirt and detritus on outdoor walks. Hence, it’s worthwhile brushing your doggie after every excursion.

Out of 200 breeds, the Bull Terrier ranks as the 66th most intelligent canine. As long as you ensure that training is fun, your pooch will learn rapidly.

Do Bull Terriers Bark a Lot?

Not really. They can become vocal when excited, during play sessions, or if a stranger enters your home.

Do Bull Terriers Have Lockjaw?

No. There’s an urban myth that some breeds have a locking mechanism to prevent their prey from escaping. Scientists explain that is not the case — although they do have strong jaw muscles.